Beware of the dame!

“ I took a seat at the end of the hearthstone opposite that towards which my landlord advanced, and filled up an interval of silence by attempting to caress the canine mother, who had left her nursery, and was sneaking wolfishly to the back of my legs, her lip curled up, and her white teeth watering for a snatch. My caress provoked a long, guttural gnarl.
“You’d better let the dog alone,"growled Mr Heathcliff, in unison, checking fiercer demonstrations with a punch of his foot. “She’s not accustomed to be spoiled-not kept for a pet.”
Then, striding to a side-door, he shouted again.
“Joseph!”
Joseph mumbled indistinctly in the depths of the cellar, but gave no intimation of ascending; so, his master dived down to him, leaving me vis-à-vis the ruffiantly bitch, and a pair of grim, shaggy sheep dogs, who shared with her a jealous guardianship over all my movements.
Not anxious to come into contact with their fangs, I sat still but, imagining they would scarcely understand tacit insults, I unfortunately indulged in winking and making faces at the trio, and some turn of physiognomy so irritated madam, that she suddenly broke into a fury, and leapt on my knees. I flung her back, and hastened to interpose the table between us. This proceeding roused the whole hive. Half-a-dozen four-footed friends, of various sizes, and ages, issued from hidden dens to the common centre. I felt my heels and coat-laps peculiar subjects of assault; and, parrying off the larger combatants, as effectually as I could, with the poker, I was constrained to demand, aloud, assistance from some of the household in re-establishing peace.
Mr Heathcliff and his man climbed the cellar steps with vexatious phlegm. I don’t think they moved one second faster than usual, though the hearth was an absolute temper of worrying and yelping.
Happily, an inhabitant of the kitchen made more dispatch; a lusty dame, with tucked-up gown, bare arms, and fire-flushed cheeks, rushed into the midst of us flourishing a frying-pan; and used that weapon, and her tongue, to such purpose, that the storm subsided magically, and she only remained, heaving like a sea after a high wind, when her master entered the scene."
Published by Eurodog on Thursday, October 30, 2008 3 comments:

Fireworks. How to keep your dog safe. 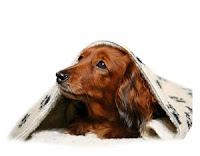 As we near Bonfire Night, let's think of our pets who hate it.
Every year thousands of animals will suffer as a result of fireworks being let off. Blue Cross animal hospitals across the UK see a marked rise in pets requiring medication during such stressful times, and many animals are brought into Blue Cross adoption centres having run away from home.
Animals have very acute hearing. Loud bangs and whistles may cause them actual pain in their ears.
This is the advice the Bleu Cross gives to dog owners ( and cat owners ):
- Always keep pets inside when fireworks are being let off.
- Make sure your dog is walked earlier in the day before the fireworks start.
- Close all windows and doors, and block off catflaps to stop pets escaping and to keep noise to a minimum.
-Draw the curtains, and if the animals are used to the sounds of TV or radio, switch them on (but not too loudly) in order to block out some of the noise of the fireworks.
- Ensure dogs are wearing some form of easily readable identification (ID) – even in the house. By law, they should have at least a collar and tag. Think about fitting pets with a microchip, so that if they do run away they have a better chance of being quickly reunited with you.
- Prepare a ‘den’ for your pet where it can feel safe and comfortable – perhaps under a bed with some of your old clothes. It may like to hide there when the fireworks start.
- Let your pet pace around, whine, and hide in a corner if it wants to. Do not try to coax it out – it’s just trying to find safety, and should not be disturbed.
- Try not to cuddle and comfort distressed pets as they will think you are worried too, and this may make the problem worse. Instead stay relaxed, act normally and praise calm behaviour.
- Avoid leaving your pet alone during such potentially upsetting events. If you do have to leave the house, don’t get angry with your pet if you find it has been destructive after being left on its own. Shouting at a frightened pet will only make it more stressed.
- Don’t tie your dog up outside while fireworks are being let off, ie outside a shop while you pop inside, or leave it in the garden or in your car.
- Never take your dog to a fireworks display. Even if it doesn’t bark or whimper at the noise, it doesn’t mean it is happy. Excessive panting and yawning can sometimes indicate that your dog is stressed.
Published by Eurodog on Sunday, October 26, 2008 10 comments:

This picture is for you, Winchester Whisperer.
Published by Eurodog on Thursday, October 23, 2008 5 comments:

A Chinese zoo has given an orphan monkey a guard dog to stop it being bullied by bigger primates.
Keepers at Jiaozuo City Zoo said the monkey was continually being bullied and they had intervened several times to save his life.
"So we put a dog in the monkey cage, hoping he can protect the orphan," a zoo spokesperson told the China News Network.
The zoo spokesperson said the dog, Sai Hu, was doing his job well.
Published by Eurodog on Sunday, October 19, 2008 6 comments:

A British survey found that 64 percent of British dog owners would rather cuddle their dogs than their partners. 50 percent thought their dogs were better looking than their partners and 33 percent preferred dogs to people.
I wonder what Americans and other Europeans think?
Published by Eurodog on Wednesday, October 15, 2008 3 comments: 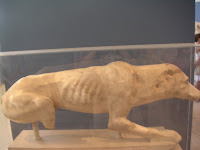 The marble dog in the middle of room 4 of the Acropolis Museum in Athens was probably the guardian to the entrance to the sanctuary of Artemis Brauronia in the southwest part of the Acropolis. This statue is dated 520 B.C.
Published by Eurodog on Sunday, October 12, 2008 3 comments:

Jacques Brel died 30 years ago today. He was born in Brussels and died in Paris. He is buried alongside Paul Gauguin on the island of Hiva Oa in the Marquesas Islands in French Polynesia.
He sang about Brussels. He invented the verb " brusseler ".
He sang about Belgium. "Le plat pays qui est le mien".
He sang about it's people. "Les Flamandes dansent sans rien dire ..."
In his song "Ne me quitte pas", these lines spring to mind:
"Laisse-moi devenir
L'ombre de ton ombre
L'ombre de ta main
L'ombre de ton chien
Ne me quitte pas ......."
Published by Eurodog on Thursday, October 09, 2008 5 comments: 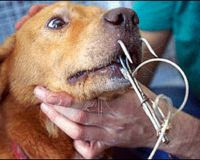 Stray dogs are being skewered on hooks and dragged behind boats as live shark bait, The Sun shockingly revealed a few days ago. The cruel practice takes place on French-controlled Reunion Island in the Indian Ocean.
A six-month-old labrador pup was recently found alive with a huge double hook through its snout - like the dog in the picture - and another through a leg.
The pup was found in a coastal creek and is thought to have somehow freed itself from a fishing line.
But other dogs and kittens have been chomped up and swallowed by sharks.
The RSPCA plans to petition the French government, demanding an end to the hideous torture.
If you would like to sign a petition to stop this practice, here is the link:
http://www.petitiononline.com/13by3/petition.html
Published by Eurodog on Sunday, October 05, 2008 26 comments: 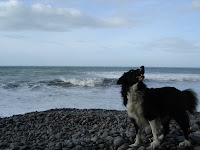 World Animal Day is not linked to any one individual, organisation or campaign, but belongs to everyone. It was started in 1931 at a convention of ecologists in Florence as a way of highlighting the plight of endangered species. Since then it has grown to encompass all kinds of animal life and is widely celebrated in countries throughout the world. October 4 was chosen as World Animal Day as it is the Feast Day of St Francis of Assisi, the patron saint of animals.
World Animal Day’s mission statement is:
To celebrate animal life in all its forms
To celebrate humankind’s relationship with the animal kingdom
To acknowledge the diverse roles that animals play in our lives – from being our companions, supporting and helping us, to bringing a sense of wonder into our lives
To acknowledge and be thankful for the way in which animals enrich our lives.
Published by Eurodog on Saturday, October 04, 2008 2 comments: