It's raining cats and dogs 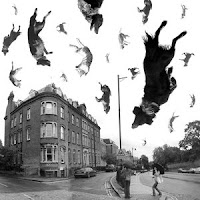 Why “cats and dogs”?
In 1738, Jonathan Swift published his “Complete Collection of Genteel and Ingenious Conversation,” a satire on the conversations of the upper classes. One of his characters fears that it will “rain cats and dogs.” Whether Swift coined the phrase or was using a cliché, his satire was likely the beginning of the phrase’s popularity.
Etymologists have suggested a variety of mythological and literal explanations for why people say “it’s raining cats and dogs” to describe a heavy downpour. Here are some of the popular theories:
1. Odin, the Norse god of storms, was often pictured with dogs and wolves, which were symbols of wind. Witches, who supposedly rode their brooms during storms, were often pictured with black cats, which became signs of heavy rain for sailors. Therefore, “raining cats and dogs” may refer to a storm with wind (dogs) and heavy rain (cats).
2. “Cats and dogs” may come from the Greek expression cata doxa, which means “contrary to experience or belief.” If it is raining cats and dogs, it is raining unusually or unbelievably hard.
3. “Cats and dogs” may be a perversion of the now obsolete word catadupe. In old English, catadupe meant a cataract or waterfall.
4. A false theory stated that cats and dogs used to cuddle into thatch roofs during storms and then be washed out during heavy rains. However, a properly maintained thatch roof is naturally water resistant and slanted to allow water to run off. In order to slip off the roof, the animals would have to be lying on the outside—an unlikely place for an animal to seek shelter during a storm.
5. Swift also wrote a poem, “City Shower” (1710), that described floods that occurred after heavy rains. The floods left dead animals in the streets, and may have led locals to describe the weather as “raining cats and dogs.”
Published by Eurodog on Saturday, November 27, 2010 3 comments:

Email ThisBlogThis!Share to TwitterShare to FacebookShare to Pinterest
Libellés : quotes/words/expressions 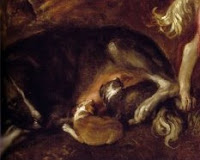 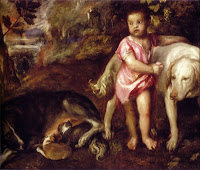 This picture by Titian was painted sometime in the 16th Century.  1565 to be precise.   Look at the nursing bitch in the detail of the picture on the right.  She has Belle's eyes.  Now this is extraordinary because at that time most household dogs were small dogs, lap dogs.  So why is this little boy out in the countryside with these big dogs?  One a sheepdog and the other one a Labrador retriever type.  There are some grapes by the boy's left hand.  Is this Rennaissance symbolism at its best?  Definitely Belle's eyes and that's all that matters to me.

Published by Eurodog on Wednesday, November 24, 2010 No comments:

Email ThisBlogThis!Share to TwitterShare to FacebookShare to Pinterest
Libellés : Belle, dogs in art

Wine Dogs is the definitive guide to dogs living and working in the vineyard, winery and tasting rooms of wineries around the globe.
Established in 1997, Wine Dogs is the original encyclopaedia of the winemaker’s best friend – their faithful hound, the winery dog. The first Australian Wine Dogs book was published in 2003 and quickly became a best seller. There are eight volumes of Wine Dogs editions including the latest Wine Dogs Australia 2, Wine Dogs USA 2 and Wine Dogs Italy editions and a host of other products such as our very popular Wine Dogs Calendars.
Here is the address: www.winedogs.com
Published by Eurodog on Sunday, November 21, 2010 3 comments:

Email ThisBlogThis!Share to TwitterShare to FacebookShare to Pinterest
Libellés : Books/publications

In the Book of Tobit, included in the Roman Catholic and Orthodox canon of the Bible, but designated as apocryphal in the Protestant tradition, we hear of Tobit, a devout Jew in exile and his son Tobias. Despite his many good works, Tobit is mysteriously blinded and despairingly begs God to take his life. At the same time in one Sarah, who is afflicted by a demon, Asmodeus, that has killed her seven husbands on their wedding night, also asks God for death. God hears both prayers and sends the archangel Raphael to help. Sent by his father on business to the distant city of , the young Tobias and his dog are guided by Raphael (in the form of a young man) to the house of Sarah. There Tobias marries Sarah and, following Raphael's instructions, exorcises the demon. They return to his home, where Tobias cures his father's blindness.  The young Tobias and his dog with the angel have been a favourite subject of Christian iconography.

Tobias and the Angel is painted on wood.  It is believed to be the work of different artists but it is attributed to Perugino who worked in Andrea del Verrochio's workshop in Florence during the 1470's.  Parts of this painting and especially the dog were painted by Leonardo da Vinci who was also a pupil of Verrochio at the time. Look at the dog in Leonardo's self portrait and the dog in the painting.
Published by Eurodog on Thursday, November 18, 2010 3 comments:

Dogs in the Bible

I am not getting very far with my research on dogs in the Bible.  They are often mentioned in the Old Testament but they are almost always regarded with scorn and hatred by the Hebrews who held them in low esteem.  Dogs often were the carriers of rabies, they smelled bad, were living in packs outside the cities and villages and were hostile towards humans.  It is not until later that man and dog teamed up together, each benefiting from each other’s company.  As the years progressed, different types of dog evolved, some to hunt, others to guard and to work in different ways and others purely as companions.
Published by Eurodog on Wednesday, November 17, 2010 1 comment: 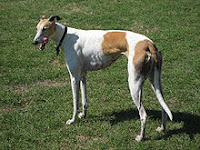 I came upon this quote and wondered why Jezebel was the recipient of such a unnoble treatment.
The Bible and the Hebrew text portray Jezebel as a power behind the throne. Ahab and Jezebel allow temples of Baal to operate in Israel, and that religion receives royal patronage. After Ahab's death, his sons by Jezebel, Ahaziah and Jehoram, accede to the throne. The prophet Elisha has one of his servants anoint Jehu as king to overthrow the house of Ahab. Jehu kills Jehoram as he attempts to flee in his war chariot. He then confronts Jezebel in Jezreel and urges her eunuchs to kill the queen mother by throwing her out of a window and leaving her corpse in the street to be eaten by dogs. Only Jezebel's skull, feet, and hands remain. Jezebel's last act, equipping herself in all her finery before she is murdered, has led to her being represented as a kind of prostitute.
I am lead to believe the greyhound is the only dog mentioned in the Bible but I am not convinced about that. I must do some more research on this. Watch this space.
Published by Eurodog on Friday, November 12, 2010 1 comment:

Islamic terrorists tried to down a US cargo plane using exploding Bulldogs, it emerged yesterday.
Two animals, stuffed with bombs and detonators, were found by US officers at Baghdad airport. The bombs had been primed to explode during the aircraft's flight to LA.
But the dogs were never loaded on board as they had been killed by the lethal substances inside them.
The discovery, kept secret for two years, was revealed in France, days after explosives were found inside printer cartridges last week on a cargo plane from Yemen.
Published by Eurodog on Wednesday, November 10, 2010 4 comments: 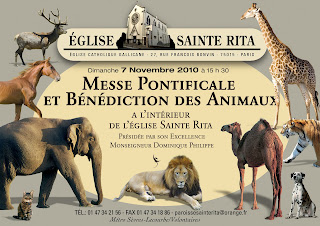 Christians everywhere celebrate the feast of St. Francis of Assisi on October 4 by having their pets blessed in the spirit of this patron saint of animals.
The parish of Saint Rita in Paris holds this mass every first sunday of November and this year several animals were present: cats and dogs of course but also camels, zebras, lamas, tortoises, fish, rabbits, snakes, ...
Published by Eurodog on Friday, November 05, 2010 3 comments:

Email ThisBlogThis!Share to TwitterShare to FacebookShare to Pinterest
Libellés : events

A bit of history 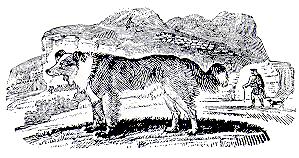 The history of the domestic dog was first chronicled in English in the 15th century.
Dame Juliana Berners (Barnes or Bernes) ,in her treatise on hunting in the Boke of St. Albans, which was first published in 1486 by a schoolmaster at St. Albans, gave what was the first list of recognised breeds to be printed in English. The classification was very limited, but it served to illustrate the importance attached even at that time to certain breeds of dogs and their purpose which have to this day retained their original nomenclature.
Dame Juliana's book was very popular.
A complete classification of dogs was published in 1570. It was called De Canibus Britannicus and was written in Latin by Dr Johannes Caius who was the physician to Queen Elizabeth I and the founder of Caius College Cambridge ( Gonville and Caius College ). It was first translated into English in 1576.
The book is divided into sections and is the first modern reference which classifies the dog’s purpose. The hunting of “beasts”, the hunting of fowl, finding game on water, finding game on land, retrieving, poaching, lapdog, scent hound, bloodhound. Section four is devoted to farm dogs and especially the Shepherd’s Dogge or Canis Pastoralis. In Bewick’s History of Quadrupeds, published in 1790, there is a woodcut of the shepherd’s dog. It bears a strong resemblance to the Border Collie of today. See picture.
Published by Eurodog on Tuesday, November 02, 2010 4 comments: