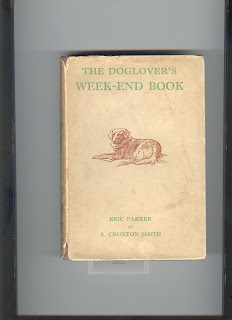 I found this book on a car boot sale in Cornwall.  It was published in 1950 and has a variety of articles and interesting facts.  I have started reading "Dogs belonging to authors - Part I".
Watch this space.  I'll report back.
Published by Eurodog on Wednesday, March 30, 2011 1 comment:

The tick from the continent

“A species of blood-sucking tick native to continental Europe has become established in the UK, scientists say.”
This was the headline on the BBC News website yesterday.
Oh dear, oh dear.
The researchers from the University of Bristol who led the study think a changing climate and "increased global movement of people and companion animals" have assisted the spread of ticks.
As a resident of continental Europe I plead not guilty of importing such a creature on insular Britain nor should UK dogs returning from a visit to the continent feel the same. The continent! This foreign, distant land!
How is this possible? The Pets Travel Scheme specifies that your pet must be treated against ticks and tapeworms not less than 24 hours and not more than 48 hours before you check-in with an approved transport company for the journey that brings your dog. Maybe the medication is no longer efficient.
Belle was one of the first dogs to come over under the scheme in the year 2000.  She first came across with us on 4th July 2000.
I can assure you that Defra have some fearsome Pets Travel Scheme staff at Dover. We have been stopped many times. On one occasion we were nearly sent back to Calais on a technicality but in the end reason and common sense prevailed.
Published by Eurodog on Thursday, March 24, 2011 3 comments:

Email ThisBlogThis!Share to TwitterShare to FacebookShare to Pinterest
Libellés : news

Another one I did not know.

The Akbash dog is a native of Turkey. These dogs are striking, white flock guards that have made a name for themselves on American farms and ranches.   They are used to guard livestock from grizzly bears, black bears, wolves and coyotes. Akbash dogs stand 32" at the shoulders and can weigh 120 lbs. and up. Their white colour distinguishes them from predators.
This breed was developed at least 3,000 years ago in the Mediterranean basin.  Akbash means "white head" in Turkish.
Published by Eurodog on Saturday, March 19, 2011 1 comment:

Thank you for commenting on my last post but I am sorry I cannot accept the dog trainer's advice that you have to spit in your dog's food to show that you are the pack leader.  You might as well advise people that they should urinate or defecate on their dog's food.  Or vomit on it for that matter.  So much nonsense is written and it really angers me.  Let's keep things in perspective.  As far as food is concerned in a normal human household, it is advisable to feed the dog after all the humans have eaten.  Humans eat first and that's it.  If you have a dominant or aggressive dog then there are other ways to show leadership.  I shall be writing about this some other time.  Watch this space.
Published by Eurodog on Thursday, March 17, 2011 4 comments:

Email ThisBlogThis!Share to TwitterShare to FacebookShare to Pinterest
Libellés : training, what next?

Spit in your dog's food

A dog trainer whom I shall not name gives training tips on the internet. This week's tips tell you how to establish yourself as the pack leader and this is tip 2 out of 3 of his basic tips:
Tip #2: Spit in your dog's food. This sounds disgusting, right? Instinctively, the most dominant dog in the pack eats first... which means that his scent (saliva) is on the food. The subordinate dogs in the pack can interpret this as a form of marking, thus you are saying, "It's not automatically your food! It's my food, but I'm letting you have some, because I'm more dominant than you."
I must admit this is a new one on me.  Definitely a different approach on a par with biting your dog when your dog attempts to nibble your ankles.  Not sure I agree with either.   Any reaction from other dog trainers out there?
Published by Eurodog on Wednesday, March 16, 2011 5 comments:

Email ThisBlogThis!Share to TwitterShare to FacebookShare to Pinterest
Libellés : training, what next?

I heard a program about dreams on the Flemish radio.  I was driving so was not paying a lot of attention.  I do not know who was being interviewed and it does not matter.  The presenter asked his guest about animals in dreams and more specifically about dogs.
"When we dream about a dog, it means a dog is dreaming about us."
I like that.
Published by Eurodog on Saturday, March 12, 2011 4 comments:

﻿The recall command is a vital command in dog training.

You must be able to call your dog back to you wherever it is.
1) when it has strayed too far, beyond the limit you have set yourself. At the moment I do not let Ozzy go further than 25 meters because I feel that beyond that I have little control over him.
2) when there is danger ie: cars, pack of dogs Ozzy is unfamiliar with, small children playing.

Ozzy is pretty good at it. I use a whistle as my vocal cords do not always carry when it is windy or if there are major distractions.

Published by Eurodog on Tuesday, March 08, 2011 No comments:

You are always on my mind.  The lyrics to Elvis Presley's song I find too sickly to print but the tune was in my head this morning.
Published by Eurodog on Thursday, March 03, 2011 5 comments: