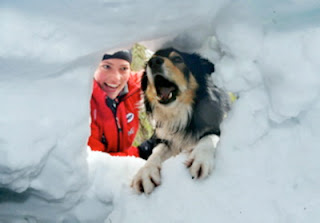 An intense training program is under way in the Austrian Alps to teach dogs to find and dig out avalanche victims before they suffocate in the snow.
The five-day session near the village of Unken in Salzburg province involves about 20 dogs and their owners, all of whom belong to a regional volunteer canine rescue squad.
Organizers say they take a playful training approach and that it takes about two years for dogs to learn all the skills they need to save lives.
Each year, avalanches in the Alpine republic kill both locals and tourists.
Published by Eurodog on Saturday, February 27, 2010 No comments: 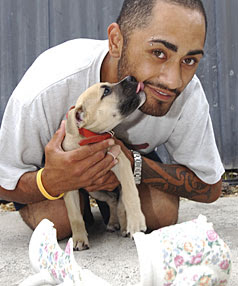 Fire officers in Gisborne, New Zealand, were called out to rescue a puppy that had its head stuck in a teapot. Senior station officer Mike Milne told the local radio station, they thought from the emergency call that they had to rescue a human baby. "So we were trying to figure out a way of getting it out on the way," he said. "We thought, oh well, at least it'll be able to breathe through the spout." It took no great technology to release the 10-week-old pitbull mastiff. “A sledgehammer and just a couple of taps and he was free in about a minute," Milne said.
The puppy suffered just a small cut on its nose and was left wagging its tail as its owners picked up the pieces. The puppy was renamed “Teapot”.
Published by Eurodog on Friday, February 26, 2010 3 comments: 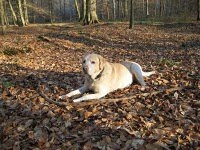 Sadly, Webster died yesterday. It is very sad news as he was part of Belle's and my life. Here is what I wrote about him, my friend S and Belle in February 2009:
"Webster belongs to my American friend S. We have known each other for a long time. Our children were at the same school but we met through our dogs. Every morning, we used to walk them together. S and I would have meaningful conversations about everything and anything under the sun. Every weekday morning we would find something to talk about. Come rain or sunshine or hail or snow. We did this for years and I cherished those moments. Sadly S's children have left school and I very rarely walk where we used to walk because Belle finds it too difficult to jump into the car now. And because of her job, S is no longer available first thing in the morning. Webster and Belle are the same age. More or less. Belle has a frisky temperament and does not get on with other dogs easily. She has been known to bare her teeth and snap even. She would see any dog off who would make an attempt to come near us. S made attempts at befriending Belle. Belle would wag her tail when S came near but that was all. She would never go to her when S called her. Never. One day, S must have given her a biscuit and the ice was broken. I guess it took a good 4 years before that happened. But Belle had the greatest respect for Webster who is such a sweet natured dog. In fact, Webster was and remains Belle's only friend. We have not been able to walk together for some time. Sadly.
Webster lives in Brussels."
Published by Eurodog on Tuesday, February 23, 2010 3 comments: 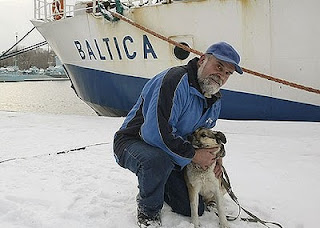 A dog found floating cold and alone on an ice floe in the Baltic Sea was rescued by a passing ship. The black-and-brown mutt drifted at least 120 kilometers before he was found adrift 24 kilometers off the Polish coast by the crew of the Baltica, a Polish ship of sea scientists. The crew said the rescue was difficult as the dog kept falling into the icy waters. The dog was warmed, massaged and fed aboard the ship, and was taken ashore for a veterinary check-up. The ship's captain said crew members put their hearts into reuniting the dog with his owners. The dog's new master is Adam Buczynski, who pulled him to safety. The decision was taken to leave the dog with Buczynski after the dog rejected six people who had claimed to be his original owner. It is believed the would-be owners were probably trying to be part of the media attention surrounding the dog's dramatic rescue. The dog was renamed Baltic.
Published by Eurodog on Monday, February 22, 2010 6 comments: 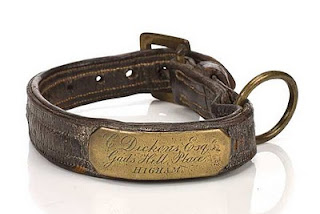 A dog collar once owned by Charles Dickens has fetched $11,590 at the Bonhams New York auction of dog art. The leather and brass collar is inscribed with Dickens' name. It had been estimated to sell at $4,000 to $6,000. Like many Victorians, Dickens was fond of dogs. He kept two Newfoundlands and a Saint Bernard during his later years.
Published by Eurodog on Thursday, February 18, 2010 2 comments:

Going to the dogs big time. 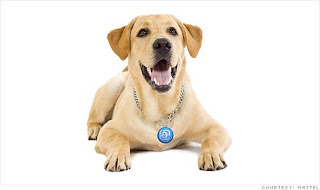 I caught this review of a new innovation on the internet and I think we will hear more about this by Christmas. It’s titled: “Social networking is going to the dogs.”
In its first-ever toy created for the canine community, Mattel is introducing a product called "Puppy Tweets" that meshes the hugely popular Twitter with consumers' love of pets.
Puppy Tweets is a plastic tag with a sound and motion sensor that you attach to your pet's dog collar and connect its USB receiver to your computer. Then you create a Twitter account for your dog and enjoy updates all day from Sparky or whatever its name is on your computer or smartphone.
The tag is set with several pre-recorded tweets that are triggered by the dog's activities. So if he's running around, you might get a tweet that says "I finally caught that tail I've been chasing and...OOUUUCHH!"
If Sparky is napping, he'll tweet "Somedays it feels like my paw is permanently on the snooze button!" If he's making a ruckus, his tweet will let you know that as well, saying"YAHOOOOOOO! Somedays you just gotta get your bark on."
"Puppy Tweets capitalizes on two popular trends - the use of social media and real time communication, as well as peoples' extreme love for their dogs," said Susan Russo, Mattel's director of marketing.
Puppy Tweets is part of the No. 1 toymaker's line-up of new products for 2010 that it showcased to members of the media ahead of the industry's annual Toy Fair in New York in February 2010.
Jim Silver, a toy industry analyst and editor-in-chief of TimetoPlayMag.com, said he was "curious" about Puppy Tweets when he first saw it.
"I thought that a 5-year-old doesn't know about Twitter," he said. But he said that Mattel is going after an entirely different market and "expanding beyond kids" with Puppy Tweets. "This is a product for adults." Said Silver: “It's a good thing to try especially since no one else has come up with a pet product quite like this."
Puppy Tweets will be available at retailers in the fall, and will carry a suggested retail price of $29.99.
We are all going to the dogs if you ask me. What else are they going to come up with?
Published by Eurodog on Thursday, February 11, 2010 1 comment:

See my previous post. Here is what I discovered after some research:

Richard Barnes is an American photographer who divides his time between commissioned photography and personal projects. While his commissioned work often looks at the way we inhabit and represent the built environment, many of his personal projects, most notably a series of photographs called "Animal Logic," look critically at both the natural world and the ways in which we attempt to institutionalize and classify nature within the museum.

The journalist, Rosecrans Baldwin, interviewed him when his book by the same name, Animal Logic, was published and asked him the following question:
“What drew you to natural history museums as a subject?”
Richard Barnes answered: “I have been interested in museums and especially natural history museums for a long time. The photographs from Animal Logic have their genesis in my time working as the excavation photographer for the University of Pennsylvania/Yale University excavations at Abydos, Egypt. After a couple of field seasons in Egypt, I became interested in where the artefacts we were extracting from the ground were ultimately interred. I began photographing in the Egyptian Museum in Cairo, concentrating on a small section of the museum dedicated to animal mummies. This led me to working specifically with collections in natural history museums, the first of which was the California Academy of Science in San Francisco, followed by many more museums throughout the world. I often seek out museums under renovation where the collection is often either being put into deep storage or is in a state of transition.”
Published by Eurodog on Monday, February 08, 2010 1 comment: 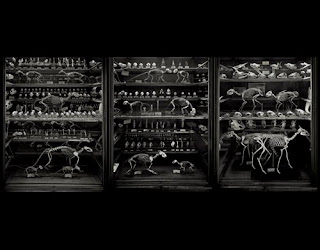 I found this photograph on my computer in the My Pictures folder. I was going to write about it but I lost my notes on it. These skeletons are exhibited in a museum. Which one?
Also the photographer specialises in animal photography but I cannot remember his name.
Can anybody out there shed any light on this?
Published by Eurodog on Thursday, February 04, 2010 2 comments: 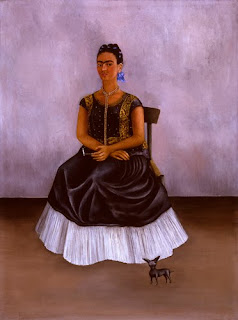 Frida Kahlo owned a Xoloitzcuintle or a Mexican Hairless as you can see on one of her self portraits in the picture. This breed was considered an earthly form of the god Xolotl, whose task it was to accompany souls to their final resting place. For this reason, the Aztecs would sacrifice a Xolo in order to be buried with it. Owners also slept with this breed for warmth. For a long time people thought the Xolo had a higher body temperature, however it only feels that way due to its hairlessness. This breed was also eaten due to the popular belief that it had curative powers for various physical problems such as arthritis. In addition, the Xoloitzcuintle was a convenient source of protein. The ancient people raised herds of this breed, fattened the youn 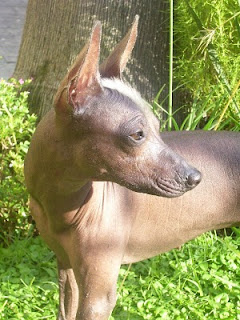 g for the market which were sold for food. The Xolo remains a rare breed, even in Mexico.
Published by Eurodog on Monday, February 01, 2010 4 comments: