Sir Isaac Newton had a dog named Diamond. Newton once bragged to his friend Wallis about his little dog. 'My dog Diamond knows some mathematics. Today he proved two theorems before lunch.'
'Your dog must be a genius,' said Wallis.
'Oh I wouldn't go that far,' replied Newton. 'The first theorem had an error and the second had a pathological exception.'"
Sir Isaac Newton's dog is famous for a serious incident. While Newton was attending divine service on a winter morning, he had left Diamond in his study. Upon returning from chapel, he found that the dog had knocked over a lighted candle on his desk, which set fire to several papers in which he had recorded the results of some optical experiments. These papers are said to have contained the labours of many years, and it has been stated that when Newton perceived the magnitude of his loss, he exclaimed: " Oh, Diamond, Diamond, thou little knowest the damage thou hast done."
Newton must have been a very gentle man to react in this manner. Très British.
Oddly enough little is known about the breed of the dog. If you click on the question "Issac Newton's dog Diamond was what breed?" on a website devoted to that purpose, you will find the following answer: "The question remains unanswered".
Published by Eurodog on Wednesday, April 29, 2009 4 comments: 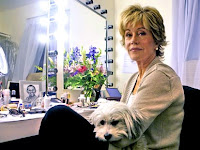 Jane Fonda has returned to the Broadway stage after 46 years, and recently her dog, Tulea, decided to get in on the action.
Fonda's Bichon somehow wiggled away from her handler during a curtain call for her new play 33 Variations and was onstage for the actress' bows.
"I saw, through my legs, this white thing and I thought, 'That's not what I think it is!' And then I heard the click-click-click of her little nails on the stage," Fonda said. "She knows what the applause means. She knows that means that it's over and that we're going to be reunited. She came looking for me."
The play is by Moises Kaufman and Fonda portrays Katherine, a musicologist dying of a wasting disease. Sounds meaningful!
PS: Jane Fonda writes a very interesting blog on a variety of matters and often about her dog.
Published by Eurodog on Sunday, April 26, 2009 2 comments: 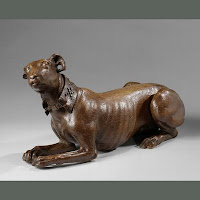 Thanks to a donation from the Dutch lottery BankGiro Lottery, the Rijksmuseum in Amsterdam has acquired five sculptures, all of which make an exceptional contribution to the Rijksmuseum’s international collection of sculptures. From 21 April 2009, the sculptures can be admired in the Acquisitions Hall of the Rijksmuseum. The highlight of the exhibition is a lively sculpture of a Greyhound: the dog is looking up, alert, as though listening to his master. On his collar is the coat of arms of the Roose family from Antwerp, so it is likely the dog really existed. This exceptional animal ‘portrait’ was created by Artus Quellinus (1609-1668) from Antwerp. From 1648 onwards the sculptor spent considerable time in Amsterdam, where he was commissioned to design the sculptural decorations of the new Town Hall (today's Royal Palace on Dam Square). Many of the sculptures of the Town Hall decorations reveal the classicist influence that became increasingly popular in the mid-seventeenth century in the Northern Netherlands. Despite the numerous commissions that awaited him in the Netherlands, Quellinus decided to return to Antwerp in 1664 where he died four years later.
Published by Eurodog on Wednesday, April 22, 2009 3 comments:

On the sixth day is the title of a book of photographs.
On the sixth day, as recounted in the Bible, God created the creatures of the earth, and man named them. Brilliantly titled in reference to that day, these pictures explore the complex relationship between man and domesticated animals. These are not animals endowed with human qualities; they are someone’s livelihood, their means of survival. Alessandra Sanguinetti skillfully portrays the lives and deaths of domesticated animals as both a practical and ritual part of human existence. Sanguinetti took these pictures in her native Argentina.
Published by Eurodog on Sunday, April 19, 2009 1 comment:

Owney, also known as "Globe-Trotter," was a mutt found abandoned outside an post office in 1888. Postal workers brought him inside, bundled him in mail bags to keep him warm, and grateful Owney began his career as the unofficial postal system dog mascot.

Over the next decade Owney traveled over 140,000 miles, once even circling the globe, following postal professionals wherever they traveled. He was outfitted with a vest to which mail clerks would pin baggage tags. "American postal workers were his family," explained the curator of the . "He liked anyone who smelled like a mail bag."

On , a postal worker in , was showing off Owney -- who was chained in the post office basement -- to a local newspaper reporter (or photographer). Owney, who was an old dog by now, was agitated and barking. He bit the postal worker on the hand. A retired postmaster and historian claims that the postal worker "spread the word that Owney was mad, and the postmaster summoned a police officer, who shot him, thus ending the career of the famous little dog. These are the facts."

Despite his one fatal gaff, Owney was still a beloved dog. Mail clerks raised money to have him stuffed and put on display in a glass case -- first at Post Office Headquarters in ; then at the 1904 World's Fair; then at the Smithsonian; then in ; then back at the Smithsonian. In 1993 he was moved to the new in . He can still be seen there today, wearing his small doggy vest bristling with some of the over 1,000 medals and tags that he accumulated in his travels.

A canine castaway lost at sea has been reunited with her owners after spending more than four months living off goats on a Queensland island in Australia.
Owner Jan Griffith said her family was devastated when their cattle dog, Sophie Tucker, fell off the side of their boat in choppy waters off the Mackay coast in north Queensland in late November.
But unbeknown to them, their hardy hound swam five nautical miles in shark infested waters to St. Bees Island, where she survived by hunting baby goats.
She was last week returned to her family after rangers captured what they believed was a wild dog.
Griffith said she and her husband had contacted rangers after friends suggested the dog — who had earned a name for herself on the island — might be their long-lost pet.
Last Tuesday the couple met the rangers' boat as it ferried the dog back to the mainland and were blown away to find Sophie Tucker on board.
"We called the dog and she started whimpering and banging the cage and they let her out and she just about flattened us,'' Griffith said.
But even more unbelievable was hearing how their domesticated "inside'' dog had survived, she said.
Published by Eurodog on Wednesday, April 08, 2009 6 comments:

A lifeguard dog that was banned from Sennen Cove beach in Cornwall will be back on duty this summer after hundreds of people signed a petition to get him back.
Normal dogs are banned from beaches in Cornwall from Easter until end of September, but Newfoundland lifeguard dog Bilbo got round that by sitting in his owner's beach buggy during patrols.
But when officials decided that wasn't safe, Bilbo was banned too.
Now about 1,500 people have signed a petition to get him classed as a working dog to see him back on patrol.

If he wasn't an official working dog, Bilbo's lifeguard owner Steve Jamieson would be fined £75 every time Bilbo was spotted on the beach.
The six-year-old dog had to pass special fitness and swimming tests before he was allowed to become Cornwall's first beach rescue dog three years ago.
His water-resistant coat and webbed paws come in very handy for the work and he's even got his own lifeguard vest.
Published by Eurodog on Thursday, April 02, 2009 8 comments: