It's all in the tail

Every dog lover knows how a dog expresses its feelings.
Ears close to the head, tense posture, hackles up and tail straight out from the body means “Watch it. Don’t mess with me”. Ears perked up, wriggly body and vigorously wagging tail means “I am sooo happy to see you!”
But there is another, newly discovered, feature of dog body language that may surprise attentive pet owners and experts in canine behaviour. When dogs feel fundamentally positive about something or someone, their tails wag more to the right side of their rumps. When they have negative feelings, their tail wagging is biased to the left.
A recent study at the University of Trieste confirms this and goes on to conclude that this intriguing observation confirms emotional asymmetry in the brain.
To reach this conclusion 30 family pets of mixed breeds were tested. They were placed in a cage equipped with cameras that precisely tracked the angle of their tail wags. Then they were shown four stimuli through a slat of the cage: their owner, an unfamiliar human, a cat and an unfamiliar dominant dog. When the dogs saw their owners, their tails wagged vigorously with a bias to the right of their body. Their tails wagged moderately, again, more to the right, when faced with an unfamiliar human and with a cat.
When the dogs looked at an aggressive, unfamiliar dog — a large Belgian shepherd Malinois — their tails all wagged with a bias to the left side of their bodies.
Thus when dogs were attracted to something, including a benign, approachable cat, their tails wagged right, and when they were fearful, their tails went left. It suggests that the muscles in the right side of the tail reflect positive emotions while the muscles in the left side express negative ones.
While some researchers have argued that only humans show brain asymmetry, strong left and right biases are showing up in the brains of many so-called simpler creatures such as the dog.
Information from the body to the brain that prompts an animal to slow down, to eat, relax and restore itself is biased towards the left brain. Whereas information that tells an animal to run, fight, breath faster and look out for danger is biased towards the right brain. In this way, the researchers argue, animals are naturally designed to cope with changing environments.
This study was published in The New York Times.
Published by Eurodog on Sunday, April 29, 2007 4 comments:

A dog who looks after a lamb is quite unusual even more so when the dog is a male puppy. Kluifje was rejected by her mother and Whisky, a 6 month old Bouvier des Flandres adopted it. Whisky started licking it and the lamb obviously accepted Whisky as its mother. They are inseparable and the little lamb spends its day asleep next to Whisky who keeps watch, licks it and takes it by the scruff of the neck when it strays too far. Whisky’s owners bottle feed the lamb 7 times a day and will look after it until it is time for it to go and live with the flock. How will Whisky react?
Published by Eurodog on Thursday, April 26, 2007 2 comments:

Unable to come to terms with the death of their pet dog, a childless couple in southern India hanged themselves. The bodies of 67-year-old retired soldier C.N.Madanraj and his wife, Tarabai, 63, were found in their home in a suburb of Hyderabad. Police said the childless couple had held a burial ceremony for their dog of 13 years, called Puppy, and hosted a feast for friends before hanging themselves in their bedroom. "The couple described the grief over their pet dog in the suicide note they left on March 29," said the local police inspector.
Published by Eurodog on Tuesday, April 24, 2007 3 comments:

It's all in the genes

All domestic dogs are descended from wolves and they were the first animals to be domesticated over 15 000 years ago. While wolves tend to look the same, today’s dog breeds come in a huge variety of shapes and sizes. The genetic origin of this diversity has long puzzled scientists. Recent research of some 3 000 dogs from 143 breeds at Cornell University, USA, has shown that a single gene could explain the size differences between breeds.

I thought you might be interested in these two dogs. Chloé, the great Dane is the tallest dog in our dog club and Gipsy, the cavalier King Charles is one of the smaller ones.
People often wonder if dog training practices are the same for all dogs. The answer is: yes it is. A dog is a dog and it is only a question of genes. In our training classes all breeds are mixed and treated the same. The relationship with the owners of small dogs is different but more about that some other time. Large dogs have different needs. They eat more for starters and their owners need to have a big car and should not live in a bedsit. It is more difficult to take them on public transport or on planes but people know this when they buy a dog. Or do they?
Published by Eurodog on Friday, April 20, 2007 6 comments:

Let's have a drink

There are no drinking restrictions in this country. Well, not really. You cannot drive under the influence but you can drink when you like. You can buy booze in the supermarket. You can have a drink anytime you wish. After a swim in the local swimming pool, at the tennis club, at the railway station waiting for your commuter train. Most places sell wine and beer. Not any old beer but strong Belgian stuff like Trappist (brewed by Trappist monks) for instance. The other day I took visiting relatives to the Grand Place. It was a beautiful spring morning and the cafes were in full swing. Most of the people on the terraces were having a beer, not coffee I noticed.
Well, this culture applies to dogs too, it would seem. I took Belle to our local park across the street from our house and the park warden had put a nice bleu bucket of water outside his little hut with "Bar pour les chiens" written on it.
Published by Eurodog on Monday, April 16, 2007 3 comments:

My dog understands everything I say. 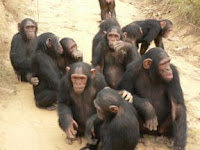 A dog’s vocabulary rarely extends 10 words. Often we hear people say “My dog understands everything”. This is false. A dog only tries to capture a human emotion. Dogs became domestic animals at about 13.000 BC; they were the first animal species to be domesticated by man. At that time man and dog lived a similar existence: they hunted and lived in packs. Man soon recognised and exploited the dog’s abilities to hunt, guard dwellings and other animals, work with man in protecting and gathering other animals such as sheep and cattle for instance.
Recent research has shown that dogs understand humans better than any other animals even those which are genetically closer to man such as the chimpanzee. It’s the dog’s interpretation of humans signs such as a facial expression or body language that make it a superior animal. Domestication has emphasised the complicity between man and dog.
Can a dog understand certain words?
A dog will pick up a change in the tone, the loudness and the pitch of the human’s voice. If we speak to a dog in a monotone, it will never learn or progress. It will try to capture the emotion in the voice. A dog cannot understand the word as such. The word will be associated with something positive and gratifying for example: “good dog” in a soft voice with a little pat on the head.
Some breeds through their genetic make up are more prone to learning but foremost it is the dog’s environment and it’s relationship with its owner that determine it’s learning capacity.
A dog is a social animal and likes to please. So it is not so much talking but communicating. This is essential for a dog. Humans have to learn to speak it’s language, to decode it’s postures as it does with us. Humans have to be coherent: words and signs are there to reinforce and should not contradict.
Can man understand what a dog is trying to say?
That’s more difficult. Man often misinterprets what the dog is trying to say and often this leads to huge misunderstandings. I will give you an example: you have crouched down to clean the floor and the dog jumps on you – and this a natural reaction – you will completely have failed your dog’s basic training if at that stage you scold or punish it. Why? Because the dog will not understand that you are inviting it to play with you and when it engages in play, you reject it. Major behavioural problems start from innocent incidents such as this where the carer of the dogs has acted as if the dog were a human.
Published by Eurodog on Monday, April 09, 2007 6 comments: 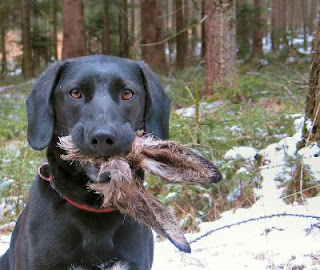 Don't you think I look sweet? 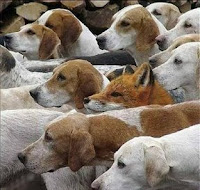 Now that the fox has grown into an adult, he can hunt with the hares and run with the hounds. Mr Blair take note.
Published by Eurodog on Friday, April 06, 2007 2 comments:

A fox cub found beneath the body of his dead mother has got a new mother. She is the 3 year old mongrel called Molly. Read on by visiting this link:
http://news.bbc.co.uk/2/hi/uk_news/england/surrey/6522905.stm
Published by Eurodog on Wednesday, April 04, 2007 5 comments: 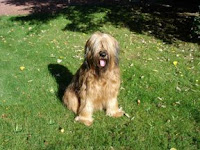 Legend has it that Squire Aubry de Montdidier's dog witnessed the assassination of his master, an intimate friend of the King of France and harassed the murderer, who was jealous of Aubry, so much that the King ordered a duel between Macaire and Aubry's dog. The assaults where so violent that Macaire, the assassin confessed his crime and was executed. So "chien d'Aubry" became "chien de Brie" or Briard.
The picture is of Rokedi, a two and a half year old Briard who belongs to a friend who is 87 years old. He is a perfect gentleman who drinks tea in the afternoon and champagne before dinner.
Published by Eurodog on Tuesday, April 03, 2007 3 comments: