Before you read on:  this is my 400th post since starting this blog.

Sgt Craven is an experienced police dog handler.
How is this possible?

Unfortunately this is not a rare occurrence. There was an identical incident last year in the Police Force in Nottingham.
Published by Eurodog on Tuesday, June 28, 2011 2 comments:

Greeks, we salute you...

Loukanikos is an unusual protester.  He is a stray dog living on the streets of and has become famous for joining in on the many protests and riots which have taken place there the past year. Often found at the front lines dodging tear gas and barking at the police, he has become a mascot for the protesters, and a symbol for the ongoing fight.  He has become popular and famous with a large following on Facebook.  He even  has a website dedicated to him with videos and photos:
http://rebeldog.tumblr.com/
Published by Eurodog on Friday, June 24, 2011 7 comments:

A Jewish rabbinical court condemned to death by stoning a stray dog it feared was the reincarnation of a lawyer who insulted its judges, reports say.
The dog entered the financial court several weeks ago and would not leave, reports Israeli website Ynet.
It reminded a judge of a curse passed on a now deceased secular lawyer about 20 years ago, when judges bid his spirit to enter the body of a dog.
The animal is said to have escaped before the sentence was carried out.
One of the judges at the court in the city's ultra-Orthodox Mea Shearim neighbourhood had reportedly asked local children to carry out the sentence.
An animal welfare organisation filed a complaint with the police against a court official, who denied reports that judges had ordered the dog's stoning but a court manager told Israeli daily Yediot Aharonot the stoning had been ordered as "as an appropriate way to 'get back at' the spirit which entered the poor dog".  according to Ynet.
Dogs are considered impure animals in traditional Judaism.
Published by Eurodog on Saturday, June 18, 2011 1 comment: 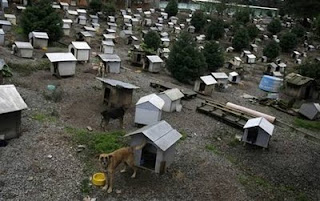 A humane organisation of has built an entire neighbourhood for around 1,600 stray dogs. Located in the southern city of , the pooch favela is probably the only one of its kind in the whole world. Due to lack of funds to build a proper dog shelter, the volunteers of the So Ama organisation were forced to build 1,000 dog houses and chain the dogs next to them. The 1,600 dogs and 200 cats are definitely not easy to take care of, and right now the dog favela is just trying to make ends meet. The $14,000 it receives monthly, from municipal authorities, and the donations are not enough to cover all the costs, which include 13 tons of food and veterinary services.
Published by Eurodog on Monday, June 13, 2011 3 comments: 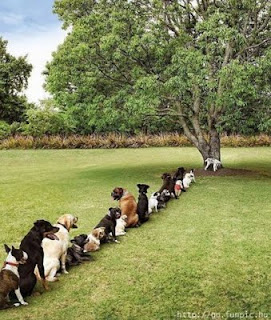 Which dog school are they attending, I wonder?
Published by Eurodog on Sunday, June 05, 2011 1 comment: