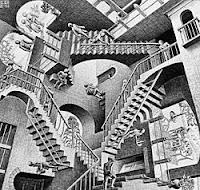 M. C. Escher (1898-1972) was a Dutch graphic artist. He is a world-famous artist known for his so-called impossible structures, such as Ascending and Descending, Relativity, his Transformation Prints, such as Metamorphosis I, Metamorphosis II and Metamorphosis III, Sky & Water I or Reptiles.  He is known for his often mathematically inspired wooduts, lithographs, and mezzotints. These feature impossible construtions, explorations of infinity, architecure, and tessellations.  His works can be seen in Het Paleis which houses a permanent exhibition dedicated to his work.  The collection is housed in the former Winter Palace of Queen Mother Emma of the . It is the only public building in where the original royal ambiance of a palace has been maintained.
This is his take on dogs: 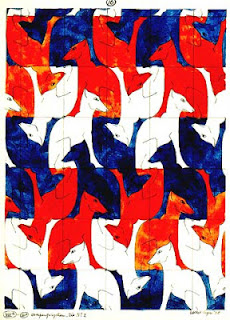 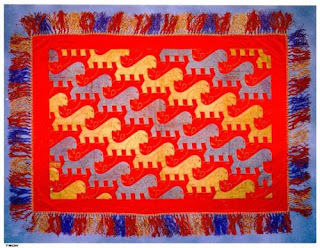 I read this in an English tabloid today and thought some of you might find this - as I do - a bit over the top.

Taiwanese dog-loving fashion designers have come up with the perfect way to stop pooches from having ruff sex in the street – special doggie chastity pants.
The £25 knickers allow a female dog to do her business when nature calls, while covering the rest of her nether regions.
Inventor Zhang Daxing explained: “It is very upsetting for owners to find their dogs being assaulted in the streets. These pants now make it impossible for them to be raped.”
Dog lover Chi Sun added: “It’s a brilliant idea. My girl is very sensitive and I find it very offensive when these rough strays start sniffing around her.”

What on earth will be next?

The Animals in War Memorial is located in on on the eastern edge of . Unveiled on 24 November 2004 by the Princess Royal, it stands as a memorial to the countless animals that have served and died under British military command throughout history.

Beneath the main header "Animals in War" the memorial has two separate inscriptions:
the first and larger reading:
"This monument is dedicated to all the animals
that served and died alongside British and allied forces
in wars and campaigns throughout time"


The second - but to me the more poignant - smaller inscription simply reads:
"They had no choice"
Published by Eurodog on Monday, November 12, 2012 3 comments:

Email ThisBlogThis!Share to TwitterShare to FacebookShare to Pinterest
Libellés : history, In memoriam 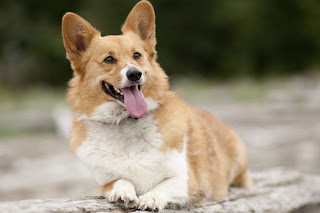 The Pembroke Welsh Corgi, the breed favoured by the Queen, is a the soft-coated wheaten terrier and it also on the Kennel Club's watch list.  Only between 301 and 450 puppies have been registered this year.
The Pembroke Welsh Corgi lineage has been traced back as far as 1107 AD.  It is said that the Vikings and Flemish weavers brought the dogs with them as they travelled to reside in . As far back as the 10th century, Corgis were herding sheep, geese, ducks, horses and cattle as one of the oldest herding breed of dogs.
The Queen owns 16 dogs of this breed.  In September 2012, it was reported that two of them, Monty (who had appeared in the James Bond scenes in the London 2012 Olympics ) and Cider (who is half Dachshund) had passed away.
Memo to self: I must check out the Flemish connection.
Published by Eurodog on Tuesday, November 06, 2012 2 comments: 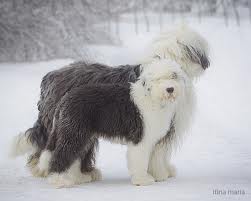 The Old English Sheepdog has been put on a watch list of endangered dogs amid fears it could face extinction.  It is being hit by the growing popularity of so-called "handbag dogs" such as
The breed,  used in advertisements for Dulux paint for more than 50 years, has just 316 of its puppies registered this year, the Kennel Club said.  By contrast, there were 28,787 Labrador Retriever puppies registered last year, making it the 's most popular dog. There were 2,669 and 5,496 Pugs registered - both breeds are growing rapidly in popularity.
So alarm bells are ringing as a breed is deemed "vulnerable" if registrations drop below 300.
The decline in the Old English sheepdog could be partly explained by lifestyle changes.  It needs a lot of grooming and exercise and so is not suitable for the fast paced urban lifestyles. It is also a lot to do with fashion. Their popularity is being eclipsed by more fashionable and smaller breeds such as and Pugs that, although small, can be much harder to train and care for.  The Siberian Husky is also growing in popularity.  It is a beautiful dog but notoriously wilful and definitely unsuitable for urban life.
Published by Eurodog on Thursday, November 01, 2012 2 comments: