The Andy Warhol Museum, located in Pittsburgh, Pennsylvania is the largest museum in the United States dedicated to a single artist. It holds an extensive permanent collection of art and archives from the Pittsburgh-born pop art icon Andy Warhol.
The museum, housed in a renovated seven-floor warehouse building, displays more than 500 works of art, drawn from its extensive collections of works by Andy Warhol. Access to the library is guarded by Cecil, the stuffed Great Dane.
Warhol was also a collector of taxidermies. He owned a lion, a peacock, a penguin and a moose head. The most famous animal in his collection, however, was the Great Dane, Cecil, who stood guard at the Factory’s door, Warhol’s original New York studio in the 1960’s before an adequate security system was installed. Many superstar visitors posed with Cecil during visits to the Factory. Cecil also appears in Warhol’s video Factory Diaries.
The dog, whose real name was "Ador Tipp Topp", was born in Germany in 1921. As a puppy, he was purchased by an American, who entered him in many competitions, including Westminster where he won a blue ribbon. After his death in 1929, Ador was sent to a taxidermist who was building a collection of champion dog breeds at Yale’s Peabody Museum. By the 1960s the collection had been relocated to storage and Ador’s remains were sold to a Yale drama student for ten dollars. The dog was eventually passed on to an antiques dealer, who claimed the dog had belonged to filmmaker Cecil B. DeMille. Warhol believed the story and purchased the dog in the late 1960s for 300 dollars. It is believed the antiques dealer made 290 dollars on the deal!.
Published by Eurodog on Wednesday, September 30, 2009 No comments:

Mum of the year 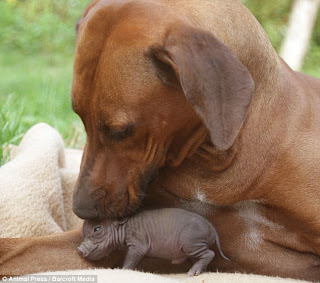 Katjinga, an eight-year-old Rhodesian Ridgeback, took on motherly duties for a tiny pot-bellied pig after it was abandoned by its family very soon after it was born. The two animals live together on a 20-acre farm in Hoerstel, Germany, where Katjinga's owners Roland Adam, 54, and his wife Edit, 44, a bank worker, keep a pair of breeding Vietnamese pigs. They named the piglet Paulinchen. Roland Adam said: “ The pigs run wild on our land and the sow had given birth to a litter of five in our forest. I found Paulinchen all alone and when I lifted her up she was really cold. I felt sure some local foxes would have taken the little pig that very night so I took it into my house and gave her to Katjinga. She had just finished with a litter of her own, who are now 10 months, so I thought there was a chance she might take on the duties of looking after her. Katjinga is the best mother you can imagine. She immediately fell in love with the piggy. Straight away she started to clean it like it was one of her own puppies. Days later she started lactating again and giving milk for the piggy. She obviously regards it now as her own baby."
Published by Eurodog on Friday, September 25, 2009 2 comments: 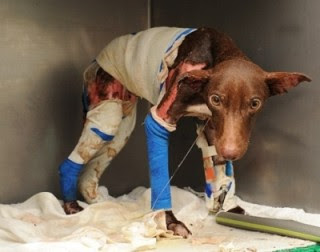 A horribly burned and disfigured young dog, Mambo, will have a rare opportunity to face his alleged tormentors in open court in December. Set on fire and left for dead on August 10 in a small French Pyrenees village, the dog suffered third-degree burns to 50 percent of his body.
A local police spokesman said: “Mambo was clearly looking for help when he went missing. He approached the pair because he is extremely friendly, but they showed him nothing but cruelty. He was held down by the woman, and then the man poured petrol over him, and set him alight. He was left for dead, but animal aid workers were alerted and managed to save him. He has made an amazing recovery.”
The 17-year-old man and 22-year-old woman who burned the small chocolate brown mixed-breed dog are charged with extreme animal cruelty. They face a prison sentence of up to six months in jail; fines up to $3,300 USD and a lifetime ban from keeping any animal.
Published by Eurodog on Tuesday, September 22, 2009 3 comments: 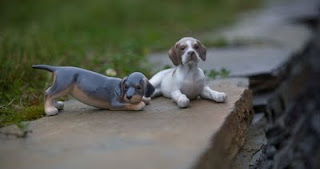 These figurines from Royal Copenhagen are from their Dog range. Each dog figurine is modeled in clay from the artist’s own living model.
Royal Copenhagen was founded in 1775. The unique Royal Copenhagen brand is held in deep respect by customers, artists, designers and employees alike. It is known worldwide for being Danish, and it is famous for maintaining and renewing the traditions of classic, hand-made, hand-painted porcelain in blue and white.
Dog figurines cost between 50€ and 150€. They can be bought on-line and they are shipped world wide.
Published by Eurodog on Sunday, September 20, 2009 No comments:

Evita, the 11-year-old dachshund of Prince Henrik of Denmark, has bitten a royal bodyguard, leaving the man in hospital needing stitches and a tetanus shot. The incident occurred when the guard was walking Evita around the gardens of the Danish royal summer residence, Fredensborg Palace. This latest occurrence has caused Danish opposition members to call for Evita to be put down claiming that: “There is no difference between a royal dog and any other”. They also want Evita to be examined by a dog psychologist.
A couple of years ago, a palace gardener was bitten by another of Prince Henrik’s dachshunds. Apparently he had to take three weeks off, on doctor’s orders, to recover from his injuries.
Either the Danish newspapers have no news to report or the palace staff does not know much about dogs.
Published by Eurodog on Wednesday, September 16, 2009 3 comments: 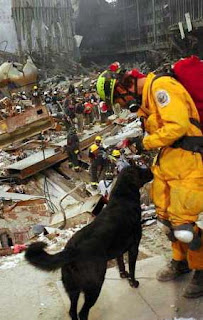 9/11 is a day which is forged in our memories. It is important to take a moment to remember those who lost their lives. But we should also pay tribute to the brave and heroic search and rescue dogs who risked their lives to help save the victims of the WTC attacks.
"What counts is not necessarily the size of the dog in fight; it's the size of the fight in the dog." General Dwight D. Eisenhower
Published by Eurodog on Friday, September 11, 2009 1 comment: