Checklist before getting a dog

Here are some points you should consider before acquiring a dog which will be your responsibility for a considerable number of years..
-Can you afford to buy a dog?
-Do you want a pedigree dog or do you wish to adopt a dog from a shelter?
-Which breed is more suitable to your needs?
-Ascertain you are not allergic to dogs.
-If you have children, remember a dog is not a cuddly toy.
-Do you have sufficient time to devote yourself to the dog? What are your work commitments?
-Are you prepared to neuter your pet to prevent unwanted pregnancies?
-Make sure the dog has proper identification. Microchipping is the only reliable way.
-Do not let the dog roam the countryside unsupervised.
-Always scoop up poop when on walks.
-Attend training classes for basic advice and to keep basic obedience up to scratch.
-Find a good local vet.
-Make sure the dog gets the right amount of exercise.
-Provide a balanced diet.
-Get the dog vaccinated and keep boosters up to date.
-Take out adequate insurance ( third party liability ).
-Follow the Country Code in rural areas or other local rules. In Belgium the Règlement de Police or the Règlement Communal.
-Do not allow your dog to jump up onto people or to be a nuisance to other dogs or humans.
-Respect the views of others. Not everybody likes dogs.

The only known living witness to the Nicole Simpson murder is Kato, the Simpson’s Akita. But why didn't Kato try to stop the murder, and why did he behave so oddly afterwards? These questions have had both dog and legal experts wondering.Why didn't the Akita attack the killer that night? The dog probably not only knew the killer, but considered him as a dominant male, an alpha male. An Akita will attack someone harming his family unless it’s another dominant household member. OJ probably was the pack leader and Nicole the alpha female. Dogs as members of a pack on the whole do not interfere in alpha male and alpha female issues such as fights. If the killer who is harming the alpha female is also the dog’s master, the dog becomes confused, doesn't know who to defend, does not know what to do and eventually does nothing.
It was also reported that the dog had blood on his stomach. He must have lain over his dying or dead mistress after the killer left. A sure sign of loyalty.
Dog owners know that when they come home, their dogs greet them warmly. But apparently OJ's dog barked angrily at him when he saw him right after the murder.Why did the dog show such defensive behaviour? "I don't believe that an Akita would ever behave that way toward someone unless that person had done something very bad," says Barbara Bouyet, national coordinator of the Akita Rescue Society of America.She was asked if Nicole's Akita did anything else incriminating after the murder? “People reported that they heard strange howls of a confused and anguished dog. These are quiet dogs," says Bouyet. "They hunt silently like cats. I think he was confused because the person attacking his mistress was not an outsider."
The Akita finds its roots in Japan where the breed is considered a symbol of good health and good fortune.
Published by Eurodog on Tuesday, February 26, 2008 12 comments: 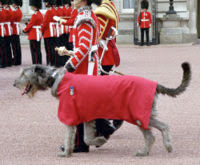 The Irish Guards were formed on 1st April 1900 by order of Queen Victoria to commemorate the bravery of the Irish people who fought in the Boer war. The Regimental Mascot is an Irish Wolfhound who is looked after by a Drummer (Guardsmen of the Corp of Drums are given the rank of Drummer), and leads the Regiment on all parades.
Published by Eurodog on Saturday, February 23, 2008 5 comments:

When Paulus Potter died of tuberculosis before he was thirty years old, he had already profoundly influenced the way animals are depicted in European art. Potter created portraits of animals, making them his picture's focus, not just a backdrop for human action. He is said to have wandered the Dutch countryside, sketchbook in hand, equally sensitive to how farm animals behave at different times of day and to light's vicissitudes from morning to dusk. Few of his contemporaries were more attuned to nature's moods or to the timeless harmony of beast, landscape, and weather. Potter's etchings show the same sensitivity as his paintings.Although Potter is considered a minor painter today, in the 1800s, Potter's life-size The Young Bull was as famous as Rembrandt's Night Watch.
The Wolfhound is one of the great dog portraits. The dog commands the scene. There are no humans in view to master or upstage it. It stands in formal pose in front of its artist-signed house. It is probably a guard dog, it is on watch. It is chained and the picture suggests it lives by itself on the edge of the land, away from human habitation yet supplied with chunks of raw meat. In the distance we see a typically Dutch landscape: the bank of a river, a cow drinking, trees, a church, a huge sky.
Interestingly, the dog seems to have no tail.
This painting is part of Empress Josephine's Malmaison Collection at the Hermitage Museum in St Petersburg. The museum houses the finest paintings, sculpture and decorative arts that she acquired for her château of Malmaison which was given to her by Napoléon after their divorce. She was entitled to retain the title of Empress and continued to live like one, despite being unable to rely exclusively on state funds for her various architectural and collecting projects. Although Josephine's great love was porcelain, she also actively collected paintings, such as Paulus Potter's imposing Wolfhound which she bought in 1811. By then she had built a top-lit gallery at Malmaison in order to house her ever-growing collection, estimated at over 250 paintings in 1811 and 350 at the time of her death three years later. She must be acknowledged as one of the most important patrons and collectors of the age even though that by the time of her death, many bills had gone unpaid for years and her creditors were so numerous they had to be listed alphabetically.
Published by Eurodog on Wednesday, February 20, 2008 5 comments:

Bonhams annual dog sale which included dog paintings, statues, fancy collars and other items fetched a total of $700,000. Top price was the $66,000 paid for a 19th-century John Emms oil painting of foxhounds and a terrier resting on a straw-covered bench. Two other paintings went for $57,000 each. Besides the paintings, the sales included a 19th-century life-size cast-iron black retriever for $10,200, a Victorian sewing cabinet decorated with hand-painted dog heads for $9,000 and a William IV silver and leather collar once worn by a champion Blenheim spaniel, for $3,900.
This must be worth looking into. According to Marion Kahan, exhibition manager for the Guggenheim Museum, “to invest wisely in art, you must have both good taste and a good business sense”. She says: “Investing in art is investing in your own aesthetic; you have to want to live with the artwork, but you also have to educate yourself on the business end. Also, be careful, because tax laws are constructed in a way where if you buy art as an investment, you cannot 'derive pleasure' from it. In other words, it can't hang in your home. Just lock it in a vault."
What else would you do with a Renoir which you have just bought for $30 million?
http://eurodogtraining.blogspot.com/2008/01/stockmarket-crash.html
Published by Eurodog on Monday, February 18, 2008 4 comments:

All this because of a dog

An unnamed Newfoundland is credited for saving Napoleon from drowning in 1815 when he fell overboard in rough seas whilst trying to escape from exile on the island of Elba. The fisherman's dog jumped into the sea and kept Napoleon afloat until he could reach safety.Little did this poor dog know that he changed the course of history by saving the French Emperor. Without him my country, Belgium, would probably not exist neither would the European Union as we know it today nor Waterloo station nor the movie Waterloo Bridge with Vivien Leigh nor some lost village on Bodmin Moor named Waterloo. Not to mention the implementation of the Civil Code ( le code Napoléon ) which strongly influenced the legal infrastructure in many countries and which historians have called “one of the few documents which have influenced the whole world”. All this because of a dog.
Published by Eurodog on Tuesday, February 12, 2008 9 comments:

Dogs play an enormously useful role in many areas of life. The Royal Mail has launched a series of stamps to celebrate the roles performed by working dogs in the UK. It is 100 years since the first British police dogs were introduced.
Fighting crime, saving lives and making everyday tasks a little easier are part of the duties performed by thousands of the UK's working dogs.
Police dogs have been honoured with a stamp, as have assistance dogs, mountain rescue dogs, customs dogs, sheepdogs and guide dogs.
Assistance dogs have been specially trained to carry out a range of tasks including opening doors, switching on lights and posting letters.Police dogs are skilled at apprehending criminals, uncovering evidence, keeping unruly crowds under control, and sniffing out explosives and drugs. This is a beautiful issue that should appeal to collectors and dog lovers alike.
Published by Eurodog on Thursday, February 07, 2008 5 comments:

Recently Lex, an 8-year-old bomb-sniffing German Shepherd attended the funeral of his best friend, a young Marine killed in Iraq. He was beside Cpl. Dustin Lee when Lee was killed in a mortar attack in Falluja. Wounded himself, Lex didn't want to leave Lee's side after the attack -- fellow Marines had to pull him away from the young man's body in order for medics to attend to him. Jerome Lee, the young Marine's father, lobbied the Marines hard for months to adopt the dog. Marine officials initially told Lee that it would be no problem to get the dog. But persuading the service to give up Lex before the dog's mandatory retirement at the age of 10 proved to be a challenge. One of the issues was making sure the dog was not "overly aggressive." Marine officials also said the request had to go through the Air Force, which in the US is the approving authority for all military dogs. After months of lobbying and negociations, Lex was finally relieved of his duties and went home to the Lee’s home in Mississippi. It is the first time the Marines have released a dog before its retirement to a former handler's family.
Published by Eurodog on Sunday, February 03, 2008 6 comments: