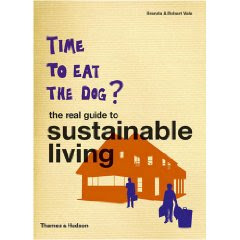 The authors of a provocative new book have bad news for animal-lovers: pets are bad for the planet. They consume vast amounts of precious resources and produce mountains of noxious waste.
In their book “Time to Eat the Dog: The Real Guide to Sustainable Living”, New Zealand-based architects Robert and Brenda Vale say keeping a medium-sized dog has the same ecological impact as driving 10,000 km a year in a 4.6 litre Land Cruiser. They calculated that the modern dog chows through about 164 kg of meat and 95 kg of cereals a year.
Here are the eco-footprints of the family pet each year as calculated by the Vales: German shepherds: 1.1 hectares, compared with 0.41ha for a large SUV. Cats: 0.15ha (slightly less than a Volkswagen Golf). Hamsters: 0.014ha (two of them equate to a medium-sized plasma TV). Goldfish: 0.00034ha (an eco-finprint equal to two cellphones).
If dogs are irresponsible energy users, I agree with a journalist from The Sunday Times who a few weeks ago wrote: “Then there is the old English sheepdog, perhaps the most environmentally friendly breed of all. If you can get hold of half a dozen or so and train them to lie down for long periods, they make very effective loft insulation.”
Published by Eurodog on Sunday, November 29, 2009 1 comment:

All in a day's work

Glenn Close on taking her dogs to work:

"When I'm shooting DAMAGES, I always take my dogs, Jake and Bill to work. One reason is because I don't want to spend money for a dog-walker, but the main reason is because I can. I have always taken my dogs to whatever set I'm working on, be it a feature film, a TV set or a theater. (When I was in the musical, SUNSET BOULEVARD, my two dogs actually had their own name plaques on my dressing room door---on their eye-level.) Another reason why I take my dogs to work is that they are incredibly well behaved so I know they will not disrupt or distract the cast and crew.

Actually, in the beginning, they did cause a bit of a disruption. We were shooting a scene in an area of Patty's office where there is no carpeting. I suddenly heard the clicking of what I knew were dog toenails! I realized that Bill and Jake, tied to my chair, were pacing back and forth in their attempt to watch the action, their toenails clicking on the linoleum. We had to stop shooting and re-locate them to a more quietly carpeted place--still within eyesight of the action. Another thing I do to prepare them for the set is to exchange their regular collars, loaded with all their noisy dog tags, with two tag-less collars, embroidered with "Bad To The Bone". They get all excited during the collar exchange--Bill must twirl around at least 10 times-- because they know they will be coming with me to the set.

I also allow both the dogs to come on the set during rehearsal. That's the time they go around greeting all the crew and being patted to their hearts' content. They really add to our quality of life, by putting a smile on everyone's faces, even on the hardest, longest days. They take their job as the DAMAGES mascots very seriously and do an incredible job.

So I salute my canine entourage and look forward to DAMAGES--Season III with them trotting behind me or lying just out of camera-range, always keeping a watchful, loving eye. "
Published by Eurodog on Wednesday, November 25, 2009 No comments: 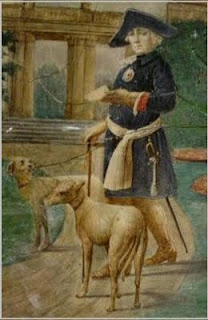 Frederick II of Prussia or Frederick the Great or nicknamed der alte Fritz ("Old Fritz") loved dogs. Although he was an accomplished rule, he had an artistic temperament. He modernized the Prussian bureaucracy and civil service and promoted religious tolerance throughout his realm. Interested primarily in the arts during his youth, Frederick unsuccessfully attempted to flee from his authoritarian father, Frederick William I, after which he was forced to watch the execution of a childhood friend.
Frederick the Great wrote endless letters to his sister, Wilhelmina, who had gone through those turbulent childhood years with him. He sought the companionship and love of his pet dogs. After the death of his beloved greyhound, Biche, he wrote in one of his letters to his sister:
“I have had a domestic loss which has completely upset my philosophy. I confide all my frailties in you: I have lost Biche, and her death has reawoken in me the loss of all my friends, particularly of him who gave her to me. I was ashamed that a dog could so deeply affect my soul; but the sedentary life I lead and the faithfulness of this poor creature had so strongly attached me to her, her suffering so moved me, that, I confess, I am sad and afflicted. Does one have to be hard? Must one be insensitive? I believe that anyone capable of indifference towards a faithful animal is unable to be grateful towards an equal, and that, if one must choose, it is best to be too sensitive than too hard”.
Frederick and his dogs are buried at Sanssouci, the summer residence he had built in Potsdam.
Published by Eurodog on Saturday, November 21, 2009 2 comments:

Special Forces units make a point of never leaving one of their own behind — and Australia’s Sabi is no exception. The bomb-sniffing black labrador has been found after being declared missing in action, presumed dead, following a gun battle in Afghanistan 14 months ago. Four-year-old Sabi was rescued by American soldiers in the remote mountains of Uruzgan province, deep inside Taleban territory in the south.
After more than a year of eluding the Taleban and living off her wits, Sabi received a celebrity welcome from General Stanley McChrystal, head of Nato troops, and Kevin Rudd, the Australian Prime Minister, who saw the dog during an overnight trip to visit his country’s servicemen.
Army vets are testing the dog for diseases, but Brigadier Brian Dawson from the Australian Defence Force, said she appeared in good health despite living wild — suggesting that someone may have been feeding her. Pedigree dogs are prized for fighting in some parts of Afghanistan and can fetch prices of more than $2,000 (£1,200), it is reported.
Published by Eurodog on Friday, November 13, 2009 1 comment:

Self portrait with dog 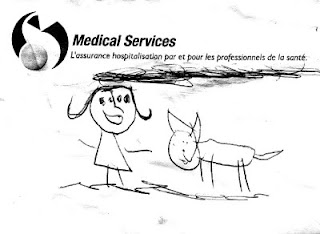 My niece, LM, drew this picture of Belle and herself last Christmas. She was 6 at the time. Why did she draw herself with 4 eyes?
Published by Eurodog on Tuesday, November 10, 2009 3 comments:

Following on from my previous post, I felt some facts were in order. It's a long post but please read on. 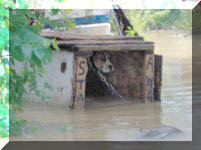 We all know about whales being killed or seals being butchered. We know about greyhound racing. We know because we have read about it in the papers or seen something about it on television. But do we really know?

Let’s consider a few facts for the USA alone:
- 5 billion US dollars are poured into animal experiments each year
- Over 70 million animals are tortured and killed in US laboratories every year.
- Over 10 billion animals are slaughtered every year for human consumption
- Approximately 3.5 million fur bearing animals such as raccoons, coyotes, bobcats, lynxes, opossums, nutria, beavers, muskrats, otters and others are killed by trappers.
- 2.7 million animals are harvested on fur farms. Half the production of fur garments comes from trapped animals.
- 50.000 greyhounds are killed every year or sent to experimentation when they are no longer profitable for the racing industry.

Let’s further consider this:
- cows kept for milk on factory farms live in conditions that cause severe suffering to the animals. They live only about 5 years as opposed to 20 to 25 years in an earlier era. To keep cows at a high level of productivity, dairy farmers keep them pregnant through artificial insemination.
- Laying hens are kept 5 or 6 to a 14 inch square cage and as many as 20% die of stress and disease from those poor living conditions.
- Rabbits are routinely blinded by having products forced into their eyes. This does not guarantee human safety but protects companies from potential lawsuits.
- Every year thousands of animals like elephants, tigers, rhinos and many endangered and protected species are killed by poachers to sell on the black markets around the world.
- Overharvesting of the seas and the oceans has led to the fish and marine mammal populations being threatened.
- More than 40.000 bulls are killed yearly in bloody bullfight spectacles around the world.
- About 100 million animals per annum are used in animal experimentation.
- 55 minks are needed to make one mink coat.
- Animal cruelty has long been an issue in the world of entertainment. Often cruel training techniques are used which inflict serious suffering in the animals. Some Hollywood films receive criticism for allegedly harmful and sometimes lethal treatment of animals. Michael Cimino in his fiasco called Heaven’s Gate had a horse blown up with dynamite while shooting a battle scene in the film to make the blood look more authentic!
- Animal used in snuff films know as crush films which can be found on the internet depict instances of severe animal cruelty and/or severe pornographic acts with animals. The animal always gets killed. The US Government wanted to ban these films but the law was overturned because these films were protected as free speech.
- Animals in wartime as used as living bombs or for military testing such as in the Bikini atomic experiments.
- Killer whales ( orcas ) and dolphins suffer stress-induced diseases and ailments when kept in small pools and forced to perform tricks in amusement parks.
- Consumption of dogs in Korea is widespread. It is believed there that if a dog releases adrenalin into its blood before it dies, the meat tastes better. Especially the meat from Saint Bernards.

Individuals abuse pets through passive cruelty such as neglect, starvation, dehydration, parasite infections, allowing a collar to grow into the animal’s skin, inadequate shelter in extreme weather condition, failure to seek care where medical attention is required. Or through active cruelty which implies malicious intent. Acts of intentional cruelty are often some of the most disturbing and should be considered as signs of serious psychological problems. Studies and FBI reports have shown that cruelty to animals is often an indicator of violent and antisocial behaviour in children and adolescents who grow up to become serial killers.

In the UK, cruelty to animals is a criminal offence for which jail sentences and heavy fines are imposed. Do other civilised countries have such laws? I wonder.

Remember: animals feel pain like we do. They feel stress and anxiety like we do.
I shall leave it at that. The reader of this post can draw his/her own conclusions.
Published by Eurodog on Monday, November 02, 2009 3 comments: