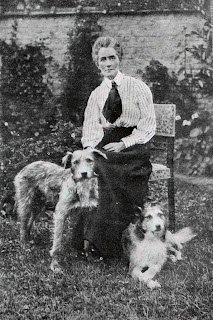 Edith Louisa Cavell  4 December 1865 – 12 October 1915 was a British nurse. She is celebrated for saving the lives of soldiers from both sides without discrimination and in helping some 200 Allied soldiers escape from German-occupied Belgium during the First World War, for which she was arrested. She was subsequently court-martialled, found guilty of treason and sentenced to death. Despite international pressure for mercy, she was shot by a German firing squad. Her execution received worldwide condemnation and extensive press coverage.
Published by Eurodog on Monday, October 12, 2015 No comments:

Not many dogs would pester their owners for a pair of Neuticles. These are prosthetic testicles which owners can have implanted in their pets' scrotum after they've been castrated so as to appear "anatomically intact". Louis Schwartz is chief of staff at the Overland Veterinary Clinic in Los Angeles which performs the procedure. He says it's particularly popular with pet owners of a certain gender. "What I find is the vast majority are men. I can only think of one woman who has come to me to have the procedure on her pet. She was an animal control officer whose husband, because of his religious beliefs, did not want the dog to be neutered," he said."One weekend while he was away she came to me with the dog and years later, this man has no idea". Having the Neuticles "placed" costs $400 and is an extreme example of the wide range of medical and cosmetic procedures now available at vet clinics which in the US account for $20bn of consumer spending. The manufacturers of Neuticles believe that:"Dogs neutered with Neuticles do not realise they have been neutered and do not suffer post neutering trauma."
In my opinion the world has gone completely nuts (sic).Ozzy has been neutered and he looks fine even without Neuticles.