You are what you eat

What about our pets? The subject of animal nutrition is as fascinating as human nutrition. A lot has been written about it recently and pictures of obese dogs appear in the media on a regular basis. You hear of dogs going into rehab, to fat farms even.We know that if we eat well, we feel well. ( We should anyway ). We have a choice but our pets do not as they depend on us totally so we owe it to them to do the best we can to feed them correctly. We also have to accept responsibility for their health. What is a normal diet for a dog? Pet food manufacturers will tell you, your vet will tell you, the breeders will tell you but let us ask ourselves what we consider normal? A normal diet for pets gives them the correct weight, a good coat, good health and bounding energy to take us on long walks. They should be able to go about their normal doggy business in a way that suits their age, their environment and their temperament. Hence we must work towards maintaining a balanced diet which is the key to good health.What’s a balanced diet? Generally speaking, a diet is balanced if the food contains proteins, minerals, fats, carbohydrates and water. All of these are necessary to ensure exercise, growth, maintenance of good health and also reproduction. They have to be suitable for the dog’s breed, age, lifestyle and activities and have to be adapted as the seasons change. Being knowledgeable about nutrition is not the privilege of the few. You do not need a science degree but you need to gather information and seek advice and a good dose of old fashioned common sense. Obesity in humans causes heart disease, diabetes, Alzheimer’s, cancer,… What does it do to our pets?
Published by Eurodog on Tuesday, February 27, 2007 5 comments:

I am on the North coast of Cornwall at the moment with my family and that includes my Border Collie, Belle. I wonder if she likes it here as much as we humans do. She hates the 850 kms journey from Brussels. Yes, we have regular stops so that she can strech her paws. We have a walled garden and the neighbour's cats use the wall as a shortcut to the other neighbour's pond.
Belle is on permanent cat patrol and stares at the wall for hours. The beaches are stunning and huge and ideal for letting her run freely off the lead. She is happy as long as we stay together. She runs around us in circles so that we have to stay in a group. She runs furiously from one end of the beach to the other trying to round up the seagulls and does not understand why they are not at her height. I really do wonder if she is happy. The sea is not a Border Collie's natural habitat but I think a dog is always happy to be with his masters. I see collies in the local farms. They are filthy, their fur matted and thick from living outdoors. They are not pets; they are working dogs and get their stimulation from herding. I do think collies are not ideal pets but I love Belle. I rescued her from certain death. As a puppy she had been tied up in a farm. Her mother also tied up was electricuted and it took three days before the farmer found her. When the time came for Belle to herd the cows, the farmer discovered that she was going to be useless as a working dog. She had not been trained not by him and not by her mother. Yes, the instinct is there and is very strong but you need to work at it and exploit it. Off to the beach...
Published by Eurodog on Sunday, February 25, 2007 3 comments: 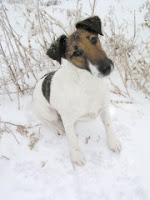 The Société Royale Saint Hubert ( SRSH ) has issued the one millionth pedigree to a smooth fox terrier named Belfox Fragolino. His pedigree certificate’s number is: LOSH 1 000 000.
LOSH ( Livres des Origines Saint Hubert ) is the active register in which all pedigrees are registered.
SRSH’s primary objective is to promote in every way, the general improvement of dogs. The organisation was founded in 1822 and is able to offer dog owners an unparalleled source of information, experience and advice on dog welfare, health, training and breeding.
Picture: a smooth fox terrier but not Belfox Fragolino.
Published by Eurodog on Monday, February 12, 2007 2 comments:

No more sex with animals, no more doggies in the window

Here is something you did not know. It is now illegal in Belgium to have sex with animals. This law was passed thanks to Magda De Meyer, Flemish Socialist MP. She pleaded for this law to be adopted after a man was acquitted for having sex with the dogs he looked after in the animal shelter where he worked. The judge could find no law under which a prosecution could be made.
Soon and also thanks to Magda De Meyer, pet shops will be banned from selling cats and dogs. Anyone wanting a dog will have to turn to breeders or to animal refuges.
I welcome these new restrictions. Dogs in shops have shady origins and are often kept in atrocious conditions. They are often diseased. Being kept in cages or confined spaces, being without human contact, being in a stressful environment during the crucial first three to 12 weeks of their lives leads to behavioural problems. Often they become aggressive towards humans or other dogs so much so that in the wrong hands they become real liabilities and they have to be put down. So if you want to buy a dog in Belgium, check out this website: http://www.srsh.be
The aim of the Société Royale Saint-Hubert, founded in 1822 is to improve the quality of dog breeding in Belgium. It issues about 25 000 pedigrees per year, keeps a vigilant eye on some 2500 amateur and professional breeders and authorises roughly 1000 canine events organised by 400 affiliated clubs.
I am the secretary and head of the obedience section at the RCCDISH, one of those affiliated clubs.
Published by Eurodog on Thursday, February 08, 2007 8 comments: