Chief Seattle, a Duwamish chief, wrote a letter to President Franklin Pierce in December of 1854, following the U.S government’s offer to buy two million acres of Native American land in the Pacific North West.
Here is a quote from the letter which is relevant in our relationship with dogs: "What is man without the beasts? If all the beasts were gone, men would die from great loneliness of spirit, for whatever happens to the beast also happens to the man".
Published by Eurodog on Thursday, January 27, 2011 2 comments: 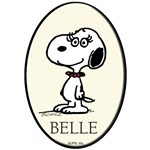 Belle is Snoopy's sister. She lives in Kansas City, Missouri with her unnamed teenage son whom Snoopy noted as resembling the Pink Panther. Belle herself looks like her brother, but with longer eyelashes. In addition she wears a lace collar.
In the comic strip, Peanuts by Charles M. Schulz, Snoopy was often stated to have seven siblings. Andy, Marbles, Olaf, Spike and Belle. And Molly and Rover although they are of little importance. In the June 6, 1959 comic strip, following the birth of Charlie Brown's sister Sally, Snoopy remarks that he has no brothers or sisters, and is an "only dog." However, in a March 18, 1971 strip, Snoopy writes in his autobiography: "I was born one bright Spring morning at the Daisy Hill Puppy Farm. I was one of eight puppies."
Their mother is called Missy, but has appeared only once in Peanuts, on July 26, 1996.
Like Spike, Belle also plays the violin.
Belle only made a few appearances in the strip, but is well-remembered because of the Belle stuffed animal toys sold in the late 1970s and early 1980s. Many people who were not regular readers of the comic strip mistakenly thought that she was Snoopy's girlfriend, rather than his sister. In Snoopy's World War I fantasies, Belle is a nurse, not a soldier. 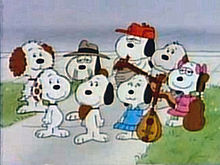 Email ThisBlogThis!Share to TwitterShare to FacebookShare to Pinterest
Libellés : Belle, dogs in art 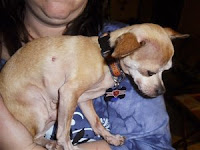 An owl attack has left a 4-pound Chihuahua with a healthy fear of the dark.
The attack happened when Chico the Chihuahua was out for a walk with his owner George Kalomiris in the Chicago suburb of Crystal Lake last week. Kalomiris says they were walking down the street when a great horned owl swooped down and tried to fly away with the 3-year-old dog.
Kalomiris says he kept a firm grip on Chico's leash as the bird dragged the dog across the sidewalk, and he managed to scare the owl away.
Chico was treated for a puncture wound caused by the owl's talons, and his owner says he's still traumatized. Kalomiris says the dog now refuses to go outside at night.
Published by Eurodog on Thursday, January 20, 2011 4 comments:

Email ThisBlogThis!Share to TwitterShare to FacebookShare to Pinterest
Libellés : unusual 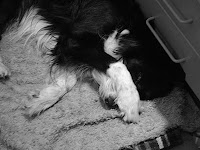 Cancer is an unfortunately common disease in dogs as well. For dogs over 10 years of age, approximately 50% of deaths are cancer-related. Like humans, there are many types of cancers and many clinical signs.
Any time your dog is not "himself or herself" it is the time to check in with your vet.

Belle's give away symptons were refusal to eat, loss of weight and lethargy.  A blood test followed by an echo sound confirmed she had liver cancer. She passed away on 4th October 2010.
Published by Eurodog on Friday, January 14, 2011 6 comments:

Email ThisBlogThis!Share to TwitterShare to FacebookShare to Pinterest
Libellés : Belle, In memoriam 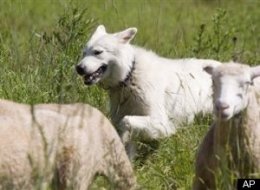 Where does your dog go when you're not looking? Does it lead a secret life? Family dogs do terrorize sheep.
An Australian study of 1,400 dogs that attacked livestock found most dog owners, when approached by authorities, refused to believe their dog could have killed or injured any sheep. They believe their dogs are too small, too young or too friendly to harm sheep.
The researchers caught dogs from 3 months to 12 years of age, intact and sterilized dogs of both sexes, purebred and mongrel, all attacking livestock. Most of these dogs were well fed, friendly, family pets, running at large. Selective breeding has not suppressed the tendency of any breed of dog to attack and kill livestock. Animal behaviourists say it is not possible to predict whether a particular dog will attack sheep or not.
Tactics
Dogss chase and attack sheep for fun. They rarely kill the sheep immediately. The sheep usually die later from their injuries or from infection, or they must be destroyed. Livestock evaluators have described the aftermath of dog attacks as "excessive mutilation". In contrast, coyote attacks are quick. Often coyotes select one sheep to kill and eat, and leave the rest of the flock alone. Sheep flocks that experience a coyote attack are often not as stressed or noisy as those suffering from a dog attack. Dog attacks last longer and involve more chasing. Sheep attacked by dogs will have torn ears and hides, as well as bite marks on the neck, head, hind legs and flanks.
Dogs may harass injured sheep every time they get up to run away. Animal behaviourists believe the movement of the sheep away from the dog stimulates the dog to give chase. Sheep chased by dogs have drowned in streams, or have died from suffocation by piling up in fence corners or sheds.
People often think that roving packs of dogs cause most livestock predation problems. Of the 1,400 dogs caught or observed attacking livestock in the Australian study; 40% of attacks were by single dogs, 51% of attacks by a pair of dogs — usually a male and a female, and just 9% were by 3 or more dogs.
Authorities used specially trained tracking dogs to find the trail of the offending dogs and followed them to their homes. If 2 or more dogs were involved in an attack, they were usually from the same home or were neighbours. These dogs were mostly approachable family pets. Dog owners think that it is not possible for their pet to be attacking sheep because their dog is not vicious and has never bitten anyone. Owners should understand the reason why a dog attacks sheep — it's all for the love of the game. Dogs do not bite people because they are being predatory; they bite people because they are dominant, frightened, or because they are protecting something or someone.
What You Can Do About It?
Dogs can only attack sheep if they are allowed to roam. If loose, dogs may attack sheep at any time of the day or night. Be a responsible pet owner. Do not let your dog stay out all night to run or leave your dog loose to roam all day while you are at work. Have facilities for your pet that will keep it on your property at all times. A dog left to roam your property, where you don't have adequate fencing to contain it, may leave at anytime it chooses.
Attacks on sheep flocks are emotionally, as well as financially draining, for shepherds. Surviving animals usually do not produce as well ewes may abort unborn lambs and injured animals endure pain and must be treated. The shepherd must spend time and money to prevent future attacks. It is important to remember that you are legally responsible for your dog's actions.

Published by the Canadian Government.
Published by Eurodog on Friday, January 07, 2011 3 comments:

In 1856 John Gray was a night watchman working for the Edinburgh City Police Department. His work demanded that he have a watchdog and Gray got a Skye terrier called Bobby. For two years they were inseparable. Then, on February 15th 1858 John Gray died of tuberculosis. He was buried in the churchyard of Greyfriars Church in the Old Town of Edinburgh. The morning after the burial Bobby was found lying on top of the grave. Dogs were not allowed in the cemetery and Bobby was chased away by the church sexton. During the night Bobby returned and was again repulsed the following morning. This scenario was played out for several days until the sexton took pity on the dog and let him stay. Bobby was faithful to his post even in the most inclement of weather and despite determined efforts to coax him into the warm. The sexton provided him with food and water and built him a shelter near the grave. He continued to be faithful to his dead master for an amazing fourteen years. The fame of his blind devotion spread. In 1867 a new byelaw was passed. All dogs were to be licensed or they would be destroyed. Bobby’s case came up before the City Council and The Lord Provost, Sir William Chambers (co-founder of Chamber’s Dictionary and president of the Scottish Society for the Prevention of Cruelty to Animals) was so taken with Bobby’s plight that he ordered his license fees to be paid indefinitely. He gave Bobby a collar that was inscribed “Greyfriars Bobby from The Lord Provost 1867 licensed.” (The collar can be seen in The Museum of Edinburgh,)
Bobby died in 1872 and was buried just inside the gate of Greyfriars churchyard near his beloved master. His red granite headstone, unveiled by the Duke of Gloucester in 1981 reads “Greyfriars Bobby – died 14th January 1872 aged 16 years. Let his loyalty and devotion be a lesson to us all.”
Published by Eurodog on Monday, January 03, 2011 1 comment: