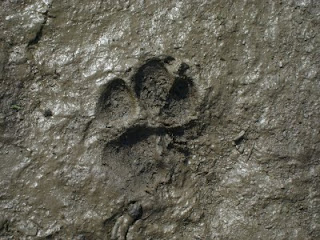 I found this paw print on a most beautiful cliff walk on the North Cornish Coast. It does not belong to Belle. Sadly, she could not come with 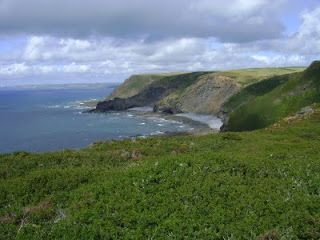 us as her arthritic hind legs could not have managed the steep climbs and descents.
Published by Eurodog on Wednesday, July 29, 2009 2 comments:

Coco Chanel was born Gabrielle Bonheur Chanel. The young Chanel worked as a seamstress during the day and at night she performed in a café singing “Qui qu’a vu Coco dans l’Trocadero”, a song about a lost dog. She adopted the name Coco and became Coco Chanel. Her cabaret career ended when, for a while, she became “une grande horizontale”, a wonderful French euphemism for high-class kept women. The rest is history.
Published by Eurodog on Saturday, July 25, 2009 4 comments: 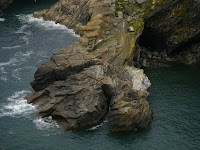 This picture was taken at Tintagel, Cornwall and I was told by one of my daughters that this formation of rocks looks like Belle's front paw.
Published by Eurodog on Tuesday, July 21, 2009 4 comments:

What's in a name?

Every Sunday morning, I help JP with Koumis, his dog. We meet come rain or shine on a field surrounded by woodland. I was asked to meet Koumis because she pulled on the lead and she was too friendly with other dogs which did not please the other dogs’ owners and which made her pull even more. We do basic obedience exercises and Koumis is really responding fast. She is very receptive and keen to learn although it takes her 20 minutes or so before she starts concentrating. She is walking to heel on the lead without pulling even when there is another dog nearby. We have just started walking to heel off the lead and she is doing really well. We also let her run off the lead. She loves that because she feels free. She does not realise it’s an obedience exercise like any other. She’s off the lead so she has to come back when JP calls her. And she does. He just has to call her name twice and she comes back. She runs up to other dogs and comes back straightaway when called for. Mind you, we have not yet come across the cows which graze on the field! I am really pleased with her – she is 6 after all - and so is JP. Koumis was very suspicious of me at first and nervous around me. She would bite my ankles as sheepdogs do when rounding up sheep or cattle. But by projecting a calm energy, she accepted me. She is so pleased to see me every Sunday morning that she jumps up with her four paws off the ground. She has an unusual name and this is what JP’s wife has to say about it: “Notre chienne berger allemand de 6 ans s'appelle Koumis, nom d'une boisson très répandue et appréciée par les nomades d'Asie centrale et de Mongolie, soit du lait de jument fermenté faiblement alcoolisé. Nous lui avons donné ce nom en souvenir de nos voyages dans ces beaux pays ».
Koumis is pronounced ku-miss. JP and Koumis live in Brussels.
Published by Eurodog on Thursday, July 16, 2009 2 comments: 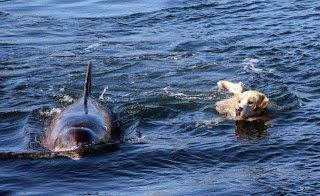 Researchers have found that swimming with dolphins appears to help alleviate mild to moderate depression. They say dolphins' friendly appearance and the emotions raised by the experience may have healing properties. Some have speculated that the ultrasound emitted by dolphins as part of their echolocation system may have a beneficial effect. Dolphins are highly intelligent animals who are capable of complex interactions, and regard humans positively. What about dogs?
Published by Eurodog on Saturday, July 11, 2009 8 comments:

Two police dogs died in the heatwave after being left in a car by their handler.
The German Shepherds, which had been donated to Nottinghamshire Police, were found dead outside the force's headquarters.
It is believed their handler was not on duty and called into the offices leaving the dogs to over-heat. It is unclear how long the animals had been left in the car in Sherwood Lodge, Arnold, on Tuesday where temperatures reached 28C. The RSPCA said temperatures inside the car could have been 47C.
The dogs were donated to carry out police work, including tracking down criminals and providing security. The Independent Police Complaints Commission said it received a referral from the force and is deciding whether to launch an inquiry. The RSPCA is investigating.
The maximum sentence for causing unnecessary suffering to an animal is six months in jail and a £20,000 fine.
The handler has not been suspended.

I will not say what I really feel about this but I must admit it is just unbelievable. Police dog handlers are trained to work with dogs, to live with dogs and to look after them. These dogs are highly trained and do fantastic work. They love their work and only do it to please their handler. That’s how a dog works. When you teach a dog anything from a simple trick such as responding to the command “sit” to retrieving game or finding drugs in suitcases or tracking for missing people or finding avalanche victims or guiding the blind, the dog does it to please his handler, the person he is working with and the person he trusts with his life.
As a dog trainer, I do warn people about leaving dogs in cars. I find it unacceptable that a person who has had training and whose job it to work with dogs, is guilty of negligence and unprofessional behaviour.

PS: I find it strange that this incident is not widely reported in the British press.
Published by Eurodog on Friday, July 03, 2009 7 comments: