Winchester Whisperer mentioned Peggy Guggenheim’s dogs eating foie gras and not living long because of it. It would seem Peggy saw the light somewhere in 1950 because from then on her dogs lived longer. They lived for 10 to 15 years according the records on the memorial stone in the Nasher Sculpture Garden in her Venetian Palazzo Venier dei Leoni where she is buried next to her beloved dogs. In photographs of her taken with her dogs, they look like Havanese. A Havanse belongs to the Toy Group. Why is this group called Toy Group? When breed associations or kennel clubs divide breeds into groups for the purpose of competition, the Toy Group contains the smallest dog breeds. In this group you find: the Bichon, the Cotton de Tulear, terriers such as the Yorkshire Terrier and Boston Terrier, the Griffon, the Papillon, Chihuahua, Cavalier King Charles and more similarly sized dogs.
The diminutive size and winsome expressions of Toy dogs illustrate the main function of this Group: to embody sheer delight. Don't let their tiny stature fool you. Many Toys are tough as nails. The barking of an angry Chihuahua, for example, is something to behold. Toy dogs will always be popular with city dwellers and people without much living space. They make ideal apartment dogs and terrific lap warmers on cold nights.
They are often referred to as “lap dogs” and in French they are called “chiens de compagnie”.
Both very apt.
Published by Eurodog on Thursday, September 27, 2007 9 comments:

Our four-legged friends can now lap it up in style and be pampered at sea, aboard the luxury liner Queen Mary 2. Guests crossing the Atlantic on the Cunard cruise liner have the luxury of bringing their pets with them.The cruise line has enhanced its Pets on Deck program to include a range of pet-friendly services and amenities, including fresh-baked biscuits at turn-down, a choice of beds and blankets and even a coat with the QM2-logo. Travelling dogs and cats also receive a complimentary gift pack which includes a frisbee, name tag, food dish and scoop, and a complimentary portrait with pet owners. The line's pet-friendly policy dates back to the maiden voyage of the Britannia in 1840, when three cats were on board. Since then, circus elephants, canaries, a monkey and even a boa constrictor have travelled on Cunard. The cruise line also has pampered a number of high profile pets, including Elizabeth Taylor's pet pooches, who travelled with the actress in the 1950s. Kennel fees range from $360 to $600.
Published by Eurodog on Sunday, September 23, 2007 9 comments:

Flowerpotdays has just awarded me this award. Thank you so much. Very much appreciated.
I am quite used to being addressed as "dude". The North Coast of Cornwall is surfers's paradise. The surf can be awesome, I gather. One of my daughters is a surfer and on several occassions this summer I went shopping with her to buy such vital items like a leash, wax, socks, .... When I asked the charming young man who was obviously a confirmed surfer dude with long rastaferian hair and minimal footwear if I could pay by credit card, he replied "Yah! ... Cool, dude." He was reading Hemingway.
I pass the award on to the following 5 other awesome dudes:
Winchester Whisperer, Welshcake Limoncello, JMB, Mutley, Mopsa
Published by Eurodog on Thursday, September 20, 2007 9 comments:

AirPress is a Japanese manufacturer of oxygen tanks, used by athletes and by Michael Jackson for their beauty rejuvenation, anti-aging, anti-wrinkle and generally feel good properties and it has just opened its first oxygen café for pets in Tokyo. Twelve Dogs O2 capsules are available in its OWND ( Oxygen Water Nutrition Dogs) café. Capsules come in three sizes ( 400 mm x 600 mm, 600 mm x 800 mm and 800 mm x 1000 mm ). Air flow is reduced so that sensitive dogs can relax more easily. Treatment lasts for 15 minutes at a charge of about 65 US dollars. Fresh herb teas and additive-free soups are also served. Have you ever seen a dog eat soup? AND what would the treatment do to a Sharpei?
Published by Eurodog on Sunday, September 16, 2007 12 comments:

Homer tells us Argos's living conditions were less than confortable. He lay "on piles of dung from mules and cattle" and was in a poor state of neglect when Ulysses set eyes on him.
"Infested with ticks, half-dead from neglect,
here lay the hound Argos.
But the moment he sensed Ulysses standing by
he thumped his tail, muzzling low, and his eras dropped,
though he had no strength to drag himself an inch
towards his master. Ulysses glanced to the side
and flicked away a tear..."
Only Poseidon had made Ulysses weep but on his return home, it was his old faithful dog who had the power to make him shed a tear.
Published by Eurodog on Wednesday, September 12, 2007 7 comments:

A tale of love and loyalty

In Homer’s epic poem The Odyssey, Ulysses was the King of the small island of Ithaca. He was married to the beautiful Penelope who gave him a son, Telemachus. At the beginning of their marriage, Greece was beset by war but Ulysses feigned madness in order to stay with his young bride. Unfortunately, his plot was dismantled and he had to go to war. In his absence of 20 years Penelope had many difficulties. She missed her husband. She was uncertain of his fate and was beset with numerous suitors who thought that a young widow and queen of a small but tidy kingdom were a great conquest. They pestered her to declare Ulysses dead and to choose a new husband from among them. Meanwhile, these suitors hung around the palace, ate her food, drank her wine, and consorted with several of her maidservants. Penelope was despondent by her husband's long absence and especially the mystery of his whereabouts. He could come home at any time - or never. Temporizing, she fended the suitors off for years, using stalling tactics that were wearing thin. She remained, however, faithful to Ulysses. Eventually, Ulysses came back to Ithaca. He arrived alone and upon landing, he was disguised as an old beggar. Ulysses’s faithful dog, Argos, was the first to recognize him in his rags. He had waited twenty years to see his master. Age, the bounding joy at seeing his master again and the anxious wait, killed the poor dog. The first human to recognize him was his old wet nurse, Euryclea, who knew him well enough to see through the rags, recognizing him by an old scar on his leg received when hunting boar. And so it goes on….
Published by Eurodog on Monday, September 10, 2007 5 comments:

This is a picture of the Grand Place in Brussels where I met the charming Winchester Whisperer for a drink yesterday.
Published by Eurodog on Sunday, September 09, 2007 5 comments: 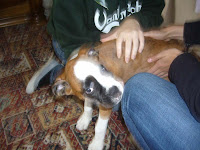 I promised the owner of Captain, a 4-month old Boxer puppy, that I would publish a picture of him on my blog. The Boxer is a German developed breed but based on recent American Kennel Club statistics, Boxers are the seventh most popular breed of dog in the United States.
During WWI, the Boxer was co-opted for military work, acting as a valuable messenger dog, pack-carrier, attack dog and guard dog.
It was not until after WWII that the Boxer became popular around the world. Boxer mascots, taken home by returning soldiers, introduced the dog to a much wider audience and it soon became a favourite as a companion animal, as a show dog and as a guard dog
Although steeped in controversy, the name "Boxer" is supposedly derived from the breed's tendency to begin a fight by standing on its hind legs and “to box” ( hence boxing and boxer ) with its front paws.
The AKC Boxer Breed Standard of 1938 states that:
"The character of the Boxer is of the greatest importance and demands the most solicitous attention. He is renowned from olden times for his great love and faithfulness to his master and household. He is harmless in the family, but distrustful of strangers, bright and friendly of temperament at play, but brave and determined when aroused. His intelligence and willing tractability, his modesty and cleanliness make him a highly desirable family dog and cheerful companion. He is the soul of honesty and loyalty, and is never false or treacherous even in his old age."
Boxers are a bright, energetic and playful breed and tend to be very good with children and make an ideal family pet. They have a strong personality and it is best if obedience training is started early to channel their energy. Owing to their intelligence and working breed characteristics, training based on the use of corrections often has limited usefulness. Boxers often respond much better to positive reinforcement techniques. It is also true that Boxers have a very long puppyhood and adolescence, and are often called the "Peter Pan" of the dog world. They are not considered fully mature until two to three years of age and thus need early training to channel their energy.
Boxers appear more comfortable with companionship, in either human or canine form. They are very active dogs that need to get a lot of exercise. Like any dog, they do not like to be left alone.
Boxers are friendly, lively companions that are popular as family dogs. Their suspicion of strangers, alertness, agility and strength make them formidable guard dogs. They sometimes appear at agility or obedience trials. These strong and intelligent animals are used as service dogs, guide dogs for the blind, therapy dogs and police dogs in the US ( K9 units ). Occasionally they are used for herding cattle or sheep. This I would love to see!
Published by Eurodog on Wednesday, September 05, 2007 6 comments: