This poster struck my eye and this is what I found out about it.
"O' Horten has been described as a movie without a strong plot or a clear chronology. The main character, Odd Horten, is an overly cautious 67-year-old man, about to retire after forty years as a train driver on Bergensbanen (the route between Oslo and Bergen). As the movie begins, we see him get up in the morning and go through a meticulous daily routine, as he prepares for his penultimate day of work. Later that evening, his colleagues throw him a farewell-party, but Odd – a timid man – is uncomfortable with the attention. After the party he ends up getting locked out of a friend's apartment. He climbs up a scaffold, and ends up in a young boy's room. The two stay up talking, Odd falls asleep on the floor and sleeps in the next morning. For the first time in his career, he then arrives too late for work, and the train has to leave without him. He is now left on the platform without any fixed points in his life, with nothing but a life of emptiness stretching out before him.
A number of scenes then follow whose exact sequence is unclear. Odd goes to visit his mother at the retirement home, something that makes him only more unhappy. His mother is senile and spends her days staring emptily out the window, and the visit reminds him of his own impending old age. He goes to the local swimming pool, but forgets his shoes as he is leaving. Instead he finds a pair of red high-heeled boots, and walks away in these. At the shop where he normally buys his tobacco, his friend Mrs Thogersen tells him that the owner has passed away. By chance he then runs into the coeval, but far more spontaneous Dr. Sissener, who has fallen asleep on the pavement, in the snow. The two spend the evening in conversation over a few drinks at Dr. Sissener's house, and Odd is led to certain realisations about his own life. It emerges that his mother – a free-spirited woman – was a ski jumper, but Odd himself never had the courage to try the sport. He now feels as if he has let her down, by never having the courage to seize the day and try new things.
In the early morning Dr. Sissener suggests the two go driving blind-folded. The stunt goes surprisingly well, but as Dr. Sissener pulls over the car, he dies. Odd is now left with responsibility for the doctor's dog, and with an urgency to live life to the fullest. As the movie ends he makes his was up to Holmenkollen ski jump, where he sees a vision of his mother a young girl. He makes a decision to try what he always wanted to do, and as the movie ends he is seen setting off from the top of the ski jump."
Sounds Bergmanesque.
Published by Eurodog on Saturday, January 31, 2009 1 comment: 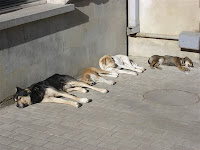 Mr Eurodog sent me a picture of stray dogs in Tbilisi (Georgia) with the caption : « Something for your blog ».
From an innocent photograph a whole world of horror unfolds. Yes, we can read a book much loved by young children called Lizzie, The Diplomatic Dog in Tbilisi, Georgia by Leah Moorefield. It tells the story of Lizzie who travels to new parts of the world every two or three years with her owner who is an American diplomat. Arriving at their new post in Tbilisi, Georgia, Lizzie must begin a new life. She quickly makes friends with other dogs, visits a cave city, explores the historical centre at night, and has many other adventures. When her owner is ready to move on, Lizzie must decide if she will go with her, or escape and stay in Tbilisi with her new friends.
Reality, however, is less romantic.
According to Anik Otieva, a journalist for the Brosse Street Journal, the on-line publication of the Caucasus School of Journalism and Media Management, Georgia leads the world in the number of people vaccinated against rabies thanks to an American aid program. The number of people bitten by dogs in Tbilisi has dramatically increased in recent years. Some 48 000 cases have been reported. There are no official statistics on how many stray dogs Tbilisi has, and there is no public pound/shelter for them. The question of how to deal with stray dogs and protect public health has been debated for years. The City of Tbilisi is paying each local district a monthly sum of USD $1,000 to 1,200 for a street dog control program. The municipality placed the problem of the stray dogs on each of its sub-departments: local district governments and the Housing and Communal departments. They in turn, in order to remove the dogs from the districts, hire sanitary cleaning organisations, whose main priority is garbage collecting. The dogs are captured by iron pliers that instantly breaks the dog’s backbone, according to some sources. Then the wounded dogs are taken to a special place be "isolated." Killed or exterminated is a better word. This is done by means of shooting, electrocuting or burning them in concentrated acid in a baker's pit. These pits were invented for big cities to destroy animal carcasses and to provide a quick death to prevent the spread of disease. These methods have been used for 15 years, because of a lack of resources to build a proper shelter for the outcast animals. Organisations that aim to protect animal rights in Georgia, such as the Animal Protection Charity Foundation "Argus" and Veterinarians Without Borders, consider the methods used to dispose of street dogs cruel and a violation of animal rights. They have suggested proper shelters should be build so that dogs could receive proper care. Sterilisation would be used to bring under control the stray dog population. These dogs would also be vaccinated against rabies and other diseases. But that’s a touchy subject as children and needy people should have priority.
An animal rights group in Georgia has set up a petition against the Vet Clinic #1, which is killing stray and unattended dogs in Tbilisi and this is the petition’s opening paragraph: “We write this appeal with the hope of improving the welfare and protection of animals that will add to the overall development of our country. Especially disturbing is the tragic fate of street animals in Georgia, and it needs immediate attention from both the state and the Georgian public. Unfortunately, Government and public are not ready yet to find humane and viable solution to this problem.”
Published by Eurodog on Wednesday, January 28, 2009 2 comments: 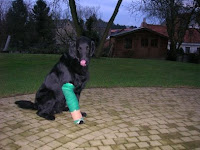 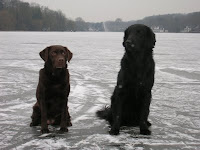 In the middle of December, I wrote about Lipton, the flat-coated retriever who badly sprained his wrist whilst jumping off a 3 meter bank into 10 cm of water. I am pleased to report that he has now fully recovered. On the left, he is pictured, on a frozen lake, with his housemate, Bambou.
http://eurodogtraining.blogspot.com/2008/12/poor-boy.html
Published by Eurodog on Saturday, January 24, 2009 3 comments:

Death of an artist

Artist Andrew Wyeth, who portrayed the hidden melancholy of the people and landscapes of Pennsylvania and coastal Maine, died early last week aged 91.
The son of famed painter and book illustrator N.C. Wyeth, Andrew Wyeth gained wealth, acclaim and tremendous popularity on his own. But he chafed under criticism from some experts who regarded him as a facile realist, not an artist but merely an illustrator. He himself has this to say about his art: "One's art goes as far and as deep as one's love goes."
Dogs feature in many of his paintings.
Published by Eurodog on Thursday, January 22, 2009 2 comments:

Mark Manders is a Dutch artist who lives and works in Belgium. He is also an author and a speaker. I read he works "in the discipline of visual arts with the use of installation, mixed media and sculpture". Sounds meaningful!

Well, he seems to like dogs.
Published by Eurodog on Saturday, January 17, 2009 2 comments:

Bashan and I is the moving story of Thomas Mann's relationship with his spirited German short-haired pointer. From their first encounter at a local farm, Mann reveals how he slowly grows to love this energetic, loyal, and intelligent animal. Taking daily walks in the nearby parkland, Mann begins to understand and appreciate Bashan as a living being, witnessing his native delight in chasing rabbits, deer, and squirrels along with his careful investigations of stones, fallen branches, and clumps of wet leaves. As their bond deepens, Mann is led to contemplate Bashan's inner life, and marvels at the ease with which his dog trusts him, completely putting his life into his master's hands.
Published by Eurodog on Wednesday, January 14, 2009 4 comments:

Animals Asia Foundation has rescued 149 dogs from an illegal trader in the Sichuan province in China after a tip-off. Local officials discovered this illegal trade and were able to confiscate the dogs. The dogs, crammed together in tiny cages, had been bound for a meat market in the southern city of Guangzhou, China’s dog-eating capital.
Animals Asia’s Founder and CEO, Jill Robinson, welcomed the 149 dogs in the AA’s rescue centre and had this to say when the truckloads arrived: “The dogs were in an appalling condition, many of them very thin and clearly in shock. I hate to think how long they had been in those cages, many of them packed in so tightly that they were piled on top of each other. We heard terrible screams coming from some of the cages, where terrified dogs were biting each other.”
She said many of the dogs were wearing collars and were possibly stolen pets; some were pure-breeds, including two dalmatians and a chocolate labrador; others had been collected as strays from the streets. She appealed to families in Pengzhou that had lost their dogs to contact the rescue centre. Animals Asia had recently built a spacious quarantine area where the dogs were welcomed at Qiming Rescue Centre to provide temporary shelter for dogs it had rescued from the Sichuan earthquake. “Luckily most of those dogs have since been adopted or reclaimed by their families,” Ms Robinson said. “So we have room to house these new dogs while they recover from this terrible trauma and await adoption.” The foundation will provide ongoing medical care and funding for dog food.
Dogs are eaten in China year-round, but more so during the cold winter months.
Dogs are often slowly beaten to death in the misguided belief that “torture equals taste”.
Published by Eurodog on Sunday, January 11, 2009 2 comments:

Which one will it be?