Audrey Hepburn was an Oscar winner, an activist, an icon - she was also an animal lover. She kept a pet deer after the animal trainer on the set of the 1959 film “Green Mansions” directed by her then-husband Mel Ferrer suggested she take her on-screen side kick, called Ip, home with her so it could learn to follow her. Bob Willoughby, a photographer on the set of many of Audrey Hepburn’s films, writes: "Beverly Hills habitués are fairly blasé about what they see but Audrey being followed around town by this lovely creature stopped everyone in their tracks."
She also had Mr Famous, a Yorkshire Terrier, who was hit by a car and killed.
She was born in Brussels on 4th May 1928.
Published by Eurodog on Thursday, February 26, 2009 2 comments: 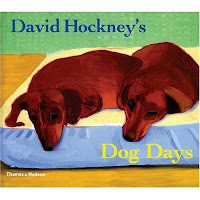 "I make no apologies for the apparent subject matter. These two dear little creatures are my friends. They are intelligent, loving, comical, and often bored. They watch me work; I notice the warm shapes they make together, their sadness and their delights. And, being Hollywood dogs, they somehow seem to know that a picture is being made." —David Hockney
They are named: Stanley and Boodgie.
Published by Eurodog on Sunday, February 22, 2009 4 comments: 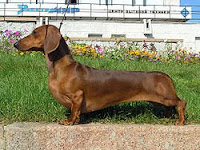 Did you know that the Dachshund has several knicknames depending on where you live:
Doxie (US)
Dackel or Teckel (Germany, France)
Wiener dog/Hotdog (US)
Sausage dog (UK/Australia/New Zealand)
Teckel (The Netherlands),
Worshond/Weenie Dog (South Africa)
Jamnik (Poland)
Jezevcik (Czechoslovakia)
Tax (Sweden)
Bassotto (Italy)
Published by Eurodog on Friday, February 20, 2009 6 comments: 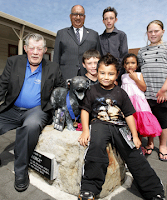 Alan Gay received Britain's PDSA Gold Medal for bravery, the animal version of the George Cross, on behalf of his faithful dog, George, who died protecting five children from pitbulls.
The Governor-General of South Taranaki, New Zealand, presented the medal to Mr Gay.
He paid tribute to the 14-year-old Jack Russell and the relationship people have with their animals. He also said George was not only an extraordinary dog but exemplified the best attributes of a Jack Russell.
"It is often said that Jack Russells are a big dog in a little dog's body."
The five children saved by George's actions in April 2007 stood beside Mr Gay as he received the award. "This is in recognition of your wonderful dog," he told Mr Gay.
South Taranaki Mayor Ross Dunlop retold the tale of George when he was walking with his neighbour's children down the street.
Richard, Kelly, and Christian Rosewarne and Darryl and Ariana Wilson, who was in a pushchair, were approached from behind by two pitbulls.
George faced the pit bulls and ran at the dogs, barking as they closed in on him.
"Thanks to George's intervention the children were able to escape but they could do nothing to help the dog that had saved them," Mr Dunlop said.
"Sadly, they could only watch as the huge pit bulls launched their savage and relentless attack."
Due to the extent of his injuries, Mr Gay agreed to have George put down.
George is the 15th recipient of the medal for animal bravery and only the third outside Britain. It is awarded by the animal charity People's Dispensary for Sick Animals of the Poor.
The award is part of a growing tribute to George that includes a statue on the town's main street, a song written by Swedish band the Talkabouts, and SPCA bravery award and a Purple Heart medal sent over by an American Vietnam veteran.
Published by Eurodog on Friday, February 13, 2009 3 comments:

Former French president Jacques Chirac was rushed to hospital after being mauled by his own 'clinically depressed' pet dog.
The 76-year-old statesman was savaged by his white Maltese dog - which suffers from frenzied fits and is being treated with anti-depressants.
The animal, named Sumo, had become increasingly violent over the past years and was prone to making 'vicious, unprovoked attacks', Chirac's wife Bernadette said.
Published by Eurodog on Monday, February 09, 2009 7 comments: 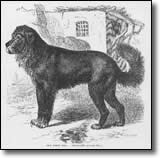 Tibetan mastiffs were used as guard dogs in the Himalayan mountains of Tibet and in lamaseries outside Lhasa. As for the temples, here is what T.Lobsang Rampa, a Tibetan Lama writes in his autobiography called The Third Eye: “Our temple cats were not for ornament only, they were fierce guardians of the masses of uncut gems strewn around the wholly figures. In houses dogs were the guardians, immense mastiffs who would pull a man down and savage him! These dogs could be cowed and driven off. Not so with the cats. Once they attacked only death could stop them. They were of the type sometimes named “Siamese”. Tibet is cold, so these cats were nearly black”. He goes on to say: “On duty, these cats prowled in the temples, silent-footed and alert, like dark shadows of the night. If anyone tried to reach the jewels, which were otherwise unguarded, a cat would emerge and leap at the man’s arm. Unless he let go immediately, another cat would jump, perhaps from the Holy Image, straight at the thief’s throat. And these cats had claws twice as long as those of the average cat and they did not let go. Dogs could be beaten off, or perhaps held or poisoned. Not so with the cats. They would put the fiercest mastiffs to flight. Only men who personally knew these cats could approach them when they were on duty.”
Today mastiffs are still used as livestock guards in the mountains as they are well adapted to the rigours of high mountain living. They also travel with caravans of Tibetan sheepherders and traders and are expected to defend herds and encampments against predators such as wolves and snow leopards.
Since most temples have been destroyed by the Chinese, I do not know what happened to the cats.
Published by Eurodog on Wednesday, February 04, 2009 4 comments: