I was out walking the other day in the forest and we came across Max, a standard poodle.  He was with his Swedish owner.  We had actually met before so it was normal the dogs immediately started playing.  They are approximately the same age. 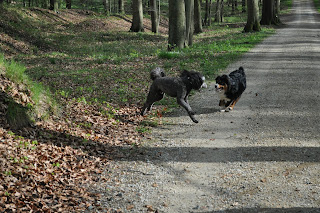 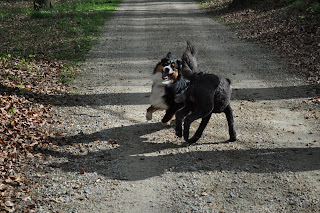 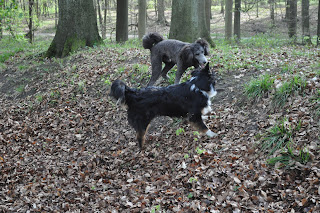 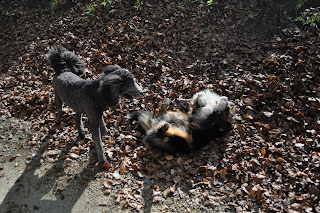 In play dogs imitate wolf behaviour.  Dogs like wolves convey the rules of the pack through body language and use it to express themselves.  In this last picture on the left you can see that Max is the more dominant male or the more high ranking in the pack.  Ozzy adopts a totally passive and submissive position by drawing his paws into his body and by exposing his neck, chest and abdomen, the most vulnerable parts of his body. Ozzy probably comes across as an unruly and boisterous adolescent.  No aggression was shown in this encounter.  A bit of growling on the part of Max and a bit of whimpering on the part of Ozzy.  The dogs parted amicably as did their owners.
Published by Eurodog on Thursday, April 21, 2011 1 comment:

This is Belem Lukeyon de la Baule or Belem.  He is 4 years old and he belongs to my French friend, CdG, who lives in La Baule. 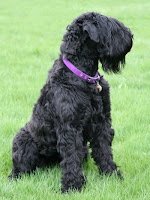 Ozzy found a new playmate in the forest yesterday. We came across Lara, a beautiful Russian Black Terrier. Quite a rare breed here in Western Europe. In fact, it was the first time I came across this breed. She was beautiful and did not mind Ozzy’s wild manners. Her owner, who was about my age, pointed out that she called her Lara after the character in Doctor Zhivago and not after Lara Croft!
During the 1930's, a military kennel named the Red Star, in Moscow, started working on a native breed that would be part of the national security force. Attempting to create the breed at that time was quite a challenge due to the slaughter of much of the purebred dog stock during the Russian Revolution, and additional depletion of pure stock during the World War and economic disasters.
Their breeding program came to life after World War II by working on selective interbreeding using giant Schnauzer, Rottweiler, Airedale and Newfoundland breeds. All in all, a total of 17 breeds were used to create the Black Russian Terrier. It was important to have a large breed, not only reliable but highly trainable in many different situations. The dog would also have to be able to endure the harsh Russian winters.

The dogs were initially used by the military police at border crossings, prisons, and military installations. In 1956 the Red Star Kennel released dogs to private breeders. The first breed standard was created by the Red Army in 1958, and was revised several times before 1981. In 1981, the Russian Ministry of Agriculture recognized the breed and it was internationally accepted by the FCI (Fédération Cynologique Internationale) in 1984.
Published by Eurodog on Monday, April 11, 2011 1 comment:

In an article on training domestic dogs about feeding:
"In the old days, before war altered the lives of dog owners, feeding was a fairly simple business.  Lean meat, lightly cooked, but not boiled, at the rate of half a pound for twelve pounds weight of dog, is a fair allowance, but war rations make any meat possible, except horseflesh, and so until easier times return, the best that can  be done is with biscuits, fish scraps and whatever bones can be provided from household joints.  A point to remember is that salt in any form should be avoided.  But a fresh supply of water, supplied daily in a clean bowl, constantly refilled, is a prime necessity.  Dogs are always wantig to drink, so keep the bowl in the shade.
A reminder:  See that food intended for the household table is kept in the larder, or when needed for a meal is placed out of the dog's reach.  And if the dog should somehow find and make away with food intended for the table, do not be angry with him.  It will have been your fault."
Remember this was written at the end of the 1940s.
Published by Eurodog on Friday, April 01, 2011 4 comments: