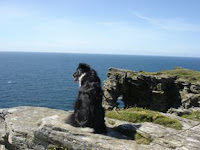 I shall be without internet connection until 5th september so I am leaving you with a picture of Belle beholding the Celtic Sea at Trevalga, North Cornwall.
Published by Eurodog on Sunday, August 26, 2007 6 comments:

Winchester Whisperer in her comment in the previous post wondered if the shepherds would have worn smocks. In this picture taken in 1876 at the First International sheepdog trials at Alexandra Palace in London, you can see that the attire was not very different from 1973 or today for that matter. The hats have been replaced by flat hats/caps it would seem.
The picture is a bit small. Click on it to enlarge it slightly.
Published by Eurodog on Wednesday, August 15, 2007 5 comments:

Flowerpotdays awarded me the Inspirational Blogger Award. I thank her very much for this great honour.
It is my turn to nominate five others. I read them every day without fail and they are:
Ramblings/Mopsa
Sicily Scene/Welshcake Limoncello
Nobody Important/jmb
Winchester Whisperer
Violets Vintage
Published by Eurodog on Saturday, August 11, 2007 11 comments:

A discovery of hundreds of Hitler’s gramophone records in the attic of a former Soviet intelligence officer who died earlier this summer sheds new light on the Nazi leader’s musical tastes. His favourite records and most scratched from frequent playing were: Beethoven Piano Sonatas Opus 78 and 90, Wagner’s Ouverture to the Flying Dutchman, Mussorgsky Boris Godunov, Tchaikovsky’s Violin Concerto and Mozart Piano Sonata n°8. It is astonishing to find Russian music in his collection. He dismissed Russians as “Untermenschen” and was contemptuous of their contribution to world culture. Most astonishing is the presence of Jewish performers. This is rather perverse. There he was listening to music performed by relatives and blood-brothers of the Jews whom he was daily sending to their deaths. The evidence that he was a music connoisseur does not make him a less hateful person. This brings me to the story of his beloved dog, Blondie, a German Shepherd. Shortly before her death, Traudl Junge, his private secretary revealed Hitler’s pride and affection for Blondie. Hitler bragged on the tricks she could perform and kept her by his side most of the time. She even slept in his bedroom in the Berlin bunker. Then, as the Russians closed in, Hitler fed Blondie cyanide. He killed her not to spare her from any of the ravages which might follow defeat, not to spare her from hunger or deprivation or disease. Rather, he had begun to suspect that the cyanide Himmler had supplied for his own suicide might be fake. So the Führer killed his dog to make sure that his supply of suicide tablets would work when the time came. Traudl Junge claims that Eva Braun was jealous of Blondie. She hated her and sometimes kicked her.
Published by Eurodog on Thursday, August 09, 2007 9 comments:

Let the dogs out!

France's national rail company announced yesterday it had taken several sleeper carriages out of service to deal with an infestation of bedbugs. "Some passengers told us they were bitten " an SNCF official announced, adding that the parasites had been found on a night train from Nice to Metz last week.
SNCF is obviously unaware that dogs can be trained to detect bedbugs as I reported in my post of 20th June. Here is the link should you wish to read it again:
http://eurodogtraining.blogspot.com/2007/06/dont-let-bedbugs-bite.html
Published by Eurodog on Saturday, August 04, 2007 4 comments:

While driving through Yorkshire in the 1970’s, a BBC producer noticed two men rounding up sheep with a dog. It gave him the idea that perhaps this activity could be brought to television. He approached the renowned country gentleman, Phil Drabble, telling him about his plans to devise a programme about sheepdog trials and suggested he should host the show. Drabble was not impressed. “I told him not to be so daft. I said the viewers would fall off their perches with boredom” and “It’s boring watching dogs chase stroppy sheep”. One Man and his Dog was launched as a series in 1976 and was exported to European countries and the United States. The urban audience was not initially convinced by the show. Some viewers were so astounded at the skill with which the sheep were commanded that they suspected the sheep of being clandestinely trained. The unlikely audience was soon won over. The programme appealed to many city dwellers’ idyllic conception of the countryside: a pastoral idyll of bright summer mornings and brisk walks across rural England with wellies, walking stick and dog. At its peak, it was watched by eight million BBC2 viewers and Phil Drabble became the face of this surprisingly popular show for 17 years. In the programme, three shepherds, each with their own sheepdog, would whistle and “come by” their way through the show. The dogs and the shepherds faced a series of obstacles, such as guiding sheep through a gate, into a ring and then into a pen. Drabble would provide the commentary, telling the viewers: “It’s going to be a close-run thing” or “The dog’s getting a little excited”. Although the programme lacked drama, it hit the right spot. It was set in beautiful rural surroundings and it was presented by the comfortable commanding Drabble who for many viewers was the quintessence of the rugged rustic, clad in Wellington boots, tweed jacket and cap. His background was very different from this image. He spent the first half of his life in a factory in West Bromwich. Drabble was appointed OBE in 1993 and died on 29th July aged 93.
Published by Eurodog on Wednesday, August 01, 2007 9 comments: