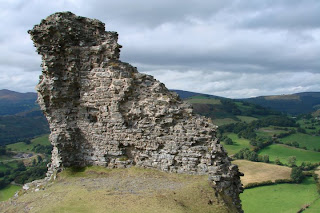 All I know about this medieval wall is that it is located somewhere in Wales and that it looks like a dog.
Any suggestions anyone?
Published by Eurodog on Tuesday, June 30, 2009 2 comments: 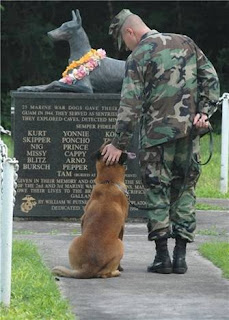 The War Dog Memorial, " Always Faithful.", located on Guam, honours the Dobermans that served with the Marines in 1944 and played a crucial role in recapturing the island.
Less than twenty-four hours after the attack on Pearl Harbor, the Japanese invaded Guam, a small Pacific island and an American possession. For two and a half years, the brave people of Guam endured a horrible occupation.
On 21st July 1944, the Americans struck back and secured the island. American Marine, Army, and Navy casualties exceeded 7,000. An estimated 18,500 Japanese were killed, and another 8,000 Japanese remained hidden in the jungle refusing to surrender.
Among the dead were 25 dogs, specially trained by the U.S. Marines to search out the enemy hiding in the bush, detect mines and booby traps, alert troops in foxholes at night to approaching Japanese, and to carry messages, ammunition and medical supplies. They were buried in a small section of the Marine Cemetery, in a rice paddy on the landing beach at Asan that became known as the War Dog Cemetery.

Interestingly enough, most of the young Marines were assigned to the war dog program only by a twist of fate. Some had never owned a dog in their lives, and some were even afraid of them. But trained as dog handlers, they were expected to scout far forward of US lines, in treacherous jungle terrain, searching for Japanese soldiers hidden in caves or impenetrable thickets. Under these circumstances, the rifles we carried were often useless; a handler's most reliable weapons were his dog's highly developed senses of smell and hearing, which could alert him far in advance of an enemy ambush or attack, or the presence of a deadly mine, so he could warn in turn the Marines who followed behind at a safer distance. It was one of the most dangerous jobs in World War II, and more dogs were employed by the 2nd and 3rd Platoons on Guam than in all of the other battles in the Pacific.

In these battles, as in their training, the men learned to depend on their dogs and to trust their dogs' instincts with their lives. William W. Putney says that when he returned home from overseas, he found that rather than spend the time and expense to detrain the dogs, the military had begun to destroy them. The dogs, primarily Doberman Pinschers and German Shepherds, had been recruited from the civilian population with the promise that they be returned, intact, when the war ended. Army and political officials argued that these dogs suffered from the "junkyard dog" syndrome ie: they were killers. Putney thought they were wrong and lobbied for the right to detrain these dogs and won. The program of de-indoctrination was overwhelmingly successful: out of the 549 dogs that returned from the war, only 4 could not be detrained and returned to civilian life. Household pets once, the dogs became household pets again. In many cases, in fact, because the original civilian owners were unable or unwilling to take the dogs back, the dogs went home with the handlers that they had served so well during the war.

William Putney enlisted in the Marines in 1943 at the age of 23 in search of military glory. Instead, Putney, a licensed veterinarian, was relegated to the Dog Corps.
Putney became the Commanding Officer of the 3rd War Dog Platoon, and later the chief veterinarian and C.O. of the War Dog Training School at Camp Lejeune, North Carolina.
His book, Always Faithful, is the story of the dogs that fought in Guam and across the islands of the Pacific, a celebration of the four-legged soldiers that Putney both commanded and followed. It is a tale of immense courage, but also of incredible sacrifice. 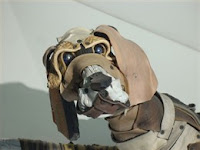 There is an exhibition of Serge van de Put’s work in Antwerp, the city were he was born. Actually so was I! He is a contemporary artist who is fascinated by the relics of our consumer society and uses trash and bits and pieces chosen for their colour and their shape. In his present work, he uses car tyres and uses them to produce figurative and explicit images of our society. He is fascinated by the human face and especially its expression of personality and temperament. He obviously likes animals. The exhibition features dogs, elephants, polar bears, monkeys, giraffes, tigers, all made out of the same grey and dull material. Rubber from tyres. Van de Put feels colour distracts and seduces the eye. The emphasis is on shape. His work was presented at the recent Venice Biennale where he exhibited an elephant.
Published by Eurodog on Sunday, June 21, 2009 4 comments:

Aung San Sun Kyi is in my thoughts today on her 64th Birthday which, sadly, she will not be celebrating with friends and family.

"The only sure bulwark of continuing liberty is a government strong enough to protect the interests of the people, and a people strong enough and well enough informed to maintain its sovereign control over the government". FD Roosevelt
Published by Eurodog on Friday, June 19, 2009 2 comments:

I was happily (sic) driving along a major road the other day and saw the above message on the back of a bus the other day: "Le chien s'échappa, Lucas voulut le rattra...". The word "chien" caught my eye so I tried to get closer to the bus to see what it was all about. This was during rush hour so some risk-taking was involved. Straining my eyes to focus on the text, wondering what was being advertised or what the message meant, if anything. I should have been focusing on the road and the other road users which is advisable in Belgium more so than anywhere else. I never caught up with the bus and had to wait for another occasion. I saw the same text for a second time a couple of days later in equally difficult driving conditions. I still could not make out what it meant and asked myself a series of questions. What has the dog got to do with it? Who is Lucas? Why is the word "rattraper" shortened to "rattra...". I decided to check it out on the internet. Well, it seems the message is supposed to encourage drivers not to exceed the speedlimit of 50km/h. Is this new? Any Belgians out there who know more about this? Your comments are most welcome.
The IBSR, the Belgian Road Safety Institute, is behind the advertising campaign. Their aim is to improve road safety and this is how they want to get their message across: I quote: "through a clear message which should be specific and one-dimensional, short, convincing, credible, clear, catchy, concrete, realistic". Talk of missing the point! And yet, the IBSR is quite capable of getting the message across. See picture of motorway bil

lboard on the right. The caption says: " What about your belt?". How dangerous is that?
Published by Eurodog on Tuesday, June 16, 2009 3 comments: 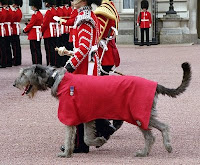 Trooping the Colour was held today. It celebrates the official Birthday of the Sovereign and is an impressive display of pageantry. It is carried out by The Queen’s personal troops, the Household Division, on Horse Guards Parade, with the Queen herself attending and taking the salute. Since 1987, The Queen has attended in a carriage rather than riding, which she did before that on 36 occasions, riding side-saddle and wearing the uniform of the regiment whose Colour was being trooped. The regiments take their turn for this honour in strict rotation. This year the Irish Guards’ Colour was being trooped. The Regimental Mascot is the Irish Wolfhound, one of the most ancient dog breeds, who is looked after by a Drummer on parades. The Mascots are all named after High Kings and Legendary Chieftains of Ireland.
Published by Eurodog on Saturday, June 13, 2009 2 comments: 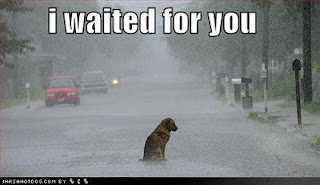 We have been having a lot of thunderstorms and torrential downpours in Brussels over the last few days.
This picture was sent to me yesterday and I thought it relevant.
Published by Eurodog on Friday, June 12, 2009 4 comments:

“If dogs could talk, perhaps we’d find it just as hard to get along with them as we do people”, writes Karel Capek, a noted Czech literary figure of the 1920’s and 1930’s. He was a novelist, a playwright, an essayist, a journalist, a writer of philosophical essays, a travel writer and he wrote a book entitled "Dášenka cili život štenete" or The life of a Puppy, the biography of Dasenka, his Jack Russell terrier.
Interestingly enough he invented the word “robot” meaning a non-human intelligent being. The word is derived from the Czech verb “robotovat” meaning “to work” and in his science-fiction books such as R.U.R. (Rossum’s Universal Robot) he addresses the aspects of mass production, atomic weapons and non-human intelligent beings long before this kind of genre was officially established. Because of his outspoken and provocative writing, he was on the Gestapo “most wanted list” and even though he was offered an exile in England, he turned this life-saving opportunity down and chose to remain in his country. Shortly after a part of Bohemia was annexed to the Third Reich, Capek died on Christmas day 1938 of pneumonia at the age of 48.

I do not agree with his quote because I fundamentally believe dogs are nicer than people.
Published by Eurodog on Tuesday, June 09, 2009 3 comments: 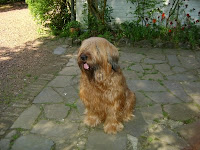 Rokedi, the Briard, belongs to my 89 year-old friend. He will be 5 at Christmas and has been my pupil for most of his living years. With me, he is stubborn, disobedient, sometimes aggressive and for ever challenging my authority. With me, he shows signs of dominance and on one occasion went for me. All this with me only. And yet, when a plane flies over, he panicks and worriedly looks out for me and makes a beeline to be as close to me as possible. So close, he has been known to knock me over.
Published by Eurodog on Friday, June 05, 2009 4 comments: