Published by Eurodog on Tuesday, February 23, 2016 No comments: 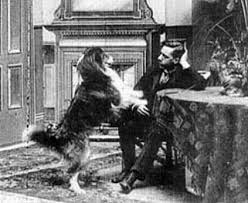 I found this picture whilst browsing on the internet.  The dog in the picture looks remarkably like Ozzy.  Same size, same tail, same head, same bib.  Obviously a sheepdog. Who are the man and his dog?
Published by Eurodog on Monday, February 15, 2016 No comments: 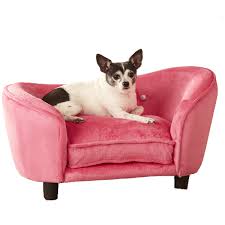 It’s Valentine’s Day today.   More than 700 $ are spent every year in the US on gifts for pets.  Because Valentine’s Day is associated with love, affection, red roses, romantic breaks, nice dinners, Champagne, perfume, jewellery, fluffy stuff preferably pink - the list  is endless - , we feel we have to shower our pets with gifts too because we fear they might miss out.  But what does a dog get out of it?  The simple answer is NOTHING.
A dog does not know Christmas from birthdays or school holidays or Easter or Labour Day in the US or August Bank Holiday in the UK.  So by giving gifts to a dog on a special human occasion, you are rewarding it but for doing what?  You create confusion.
When training a dog, you have 3 seconds for rewarding it correctly.
You ask your dog to sit for instance.  He does so.  Give him the treat straightaway.  The treat can be your most gentle voice saying: “good girl or good boy” or a toy or a crumble of cheese or a dog biscuit or a pat on the head.  Something nice.
So the dog is rewarded because he has done what you asked him to do.
Beyond the 3 seconds slot, it has no meaning other than “yummy” I am eating something nice.
Remember dogs are scavengers.  They’ll eat anything you give them.
A dog does not have human emotions or human feelings or a human time table.  A dog is a pack animal and understands pack rules.
Published by Eurodog on Sunday, February 14, 2016 No comments:

Email ThisBlogThis!Share to TwitterShare to FacebookShare to Pinterest
Libellés : facts

In the dark ages 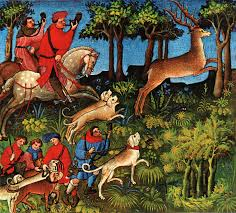 During the Middle Ages, mixed breeds of peasants’ dogs were required to wear blocks around their necks to keep them from breeding with noble hunting dogs. Purebred dogs were very expensive and hunting became the province of the rich.
Published by Eurodog on Friday, February 12, 2016 No comments: 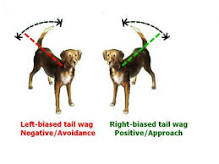 All animals communicate with energy and body language, and it’s easy to tell just from body language whether they’re fearful or aggressive. But, beyond body language, for many animals there are three important body parts with which they communicate.
Animals’ primary methods of communicating are through eye contact, their ear position, and their tails.
When an animal is being defensive or aggressive, it will make eye contact to tell whatever it’s facing to back off. When an animal is alert to danger, its ears will stand straight up. But the most important thing to watch is the tail.

A tail wag is not always friendly
When a cat wags its tail, it’s not being friendly. Its saying, “Watch out, because I’m going to attack.” When a squirrel wiggles its tail, it’s saying, “I’m big and I’m threatening, so stay away.”
When a dog wags its tail, though, it could be saying a lot of things, depending on how it’s wagging. And, in fact, a dog’s tail is probably one of the most expressive parts of its body, just ahead of its ears.
This is why docking a dog’s tail or cropping its ears hinders the dog's ability to communicate effectively. These could be compared to cutting out a human’s tongue and removing their vocal cords. When it comes to communicating with body language, those ears and tail are a major way that our dogs speak to each other — and to us.
Different tail positions indicate different things
Think of a dog’s tail as the turn-indicator lever in your car. It has a natural position, and it has two other positions that indicate different things. When a dog’s tail is in its natural position, it indicates that the dog is calm and happy — though position varies with breed. Some dogs have tails that naturally hang down behind their legs, while others have tails that curl up over their backs. When the tail is in that natural position and not moving side-to-side, it’s telling you, “I’m happy. Everything’s cool.”
When the tail moves up or down
There are two positions a dog’s tail can move to without moving side-to-side: up or down. When a dog’s tail moves up, it means that the dog is becoming more assertive or dominant. It’s like raising a flag, and the message it’s sending is this: “I’m the dog in charge here.” When the tail moves down, it’s sending the opposite message: “You’re the dog in charge here.” And if a dog’s tail curls between its legs, it’s sending the message, “I’m harmless. Don’t hurt me. I submit.”
A raised tail isn’t necessarily aggressive but a lowered tail is always submissive.
When the tail moves side-to-side
This brings us to that wagging bit, when a dog moves its tail from side-to-side. Now, the natural assumption is that a dog wagging its tail is happy, but that isn’t necessarily true. As science has shown, it really all depends on how fast the tail is moving, and to which side it shows a bias.
If the tail is moving more strongly to the dog’s right, then that dog is showing positive emotions, like excitement or interest. But if it’s moving more to the left, it’s showing negative emotions, like anxiety, fear, or aggression. From a biological standpoint, this makes sense. That’s because in many animals, including dogs and humans, the left side of the brain deals with positive behaviors while the right deals with the negative. Since each side of the brain controls the opposite side of the body, this leads to a difference in meaning exhibited by the bias of the wag.
By the way, this wiring of the sides of the brain doesn’t change between people or animals that are right or left handed/pawed.
Context is key
So put it all together, and we get this. If a dog’s tail is mostly wagging to their right and is at or lower than its normal position, then the dog is saying, “Hey, I’m happy. You’re the boss. It’s all good.” But if the tail is wagging to the left, and especially if it’s at or higher than its normal position, then the dog is saying, “Bring it. I’m in charge here.”
Speed plays a role
The one other factor to consider is the speed of the wag. The faster the tail is moving, the higher the positive or negative energy. Really fast and low to the dog’s right, really submissive dog. Really fast and high to the left, walk away. At its most extreme, the tail can appear to be vibrating instead of wagging. This is definitely the dog to avoid.
No matter the position, though, a slow moving tail indicates a calm and curious dog, and that’s the dog you can safely approach and get to know better.