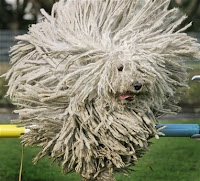 Mopsa put me in touch with this picture of an Hungarian Puli jumping over an agility hurdle.The Puli is an Hungarian sheep dog of medium size known for its long, corded coat. The tight curls of the coat, similar to dreadlocks, make it virtually waterproof. The exact ancestry of this breed is unknown although there are some references to Ancient Rome. It was probably, introduced by the migration of the Magyars, an ethnic group from Central Asia in the Middle Ages. Nomadic shepherds of the Hungarian plains valued their herding dogs, paying as much as a year's salary for a Puli. The Puli is possibly the ancestor of the modern Poodle. Pulis are very intelligent, have excellent agility, and are sufficiently obedient to train for athletic competition. They are also reliable herding dogs and are loyal to their owners.As a working dog, the Puli is very obedient, focused and determined when assigned a task. Some of them are used as police dogs too. As a shepherd, they are fiercely protective of their flock, and, despite their relatively small size, will see off any intruder they consider a threat. They make good pets and are very protective of the family and wary of strangers.Pulis are predominantly black-coated. On the whole shepherds prefer black dogs as they are easier to spot amongst the flock.At the time of WWII, the breed was almost extinct but a controlled breeding program 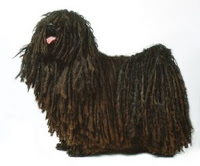 by some dedicated breeders worldwide ensured the survival of the breed.
Published by Eurodog on Tuesday, April 29, 2008 7 comments:

The cult of fear

A report in The Times says that pet owners should not let their dogs sleep in or on their bed, or even in the bedroom because of the risk of disease transmission, according to Fred Landeg, one of Britain’s leading veterinary surgeons. He said people needed to be more aware that new and emerging diseases were just as likely to affect household pets as farm animals. These are his words: “When you look at new and emerging diseases many are zootic and passable from animals to man”. Besides the risk of unknown exotic diseases, dogs also carry common food poisoning bugs: campylobacter and salmonella. Researchers say some 10 per cent of dogs are thought to carry the superbug MRSA and go on to say that many dog owners appeared unaware of, or unconcerned about the potential health from the daily interaction with their pet.
I think this is utter bilge and scaremongering at its best. It’s all bureaucratic babble drawn up by people who sit behind a desk and who are far removed from clinical vetenary medicine.
You are far more likely to catch MRSA by shaking hands with somebody or by having your wisdom teeth out in a NHS Hospital.
What you can catch from French or Italian loos is anybody’s guess.
I do believe there are good reasons for not sharing your bed with your dog. It has nothing to do with the above. I shall write about that in one of my next posts. Watch this space…
However I do agree with Dr Landeg who recognises the positive health benefits from owning a dog: people who walk dogs tend to be fitter and have lower blood pressure and people with dogs recover faster at home after an operation.
Published by Eurodog on Thursday, April 24, 2008 10 comments:

Last week Russian TV showed venerable grey-haired academics unveiling a monument to Laika , the pioneering dog that led the way to manned spaceflights on November 3rd, 1957, near the city's Military Medicine Institute by laying flowers. The U.S. space program relied mainly on tests with primates in its early stages, a fact derided by Russian scientists. "Monkeys are very ill-mannered -- they try to clutch whatever they can, they fancy they can switch whatever they want," Vladimir Ponomarenko, head of a space and aviation academy, said with a smile. "But the dog is a friend of humans and is easy to train." The dogs chosen for the Russian space program were usually stray mongrels as it was believed they could survive and adapt in harsh conditions. Also, small dogs were chosen as they could fit into the capsule and were light for launch. Two year old Laika was apparently chosen from the animal shelter in Moscow for her good looks. After all, the first Russian into space would need to be photogenic. There was intense excitement about her selection for participation in the space race and she endeared herself to scientists and the public; she was described as "quiet and charming". In my blog entry of 27th July 2007, I described how poor Laika must have suffered.
http://eurodogtraining.blogspot.com/2007/07/let-us-not-forget.html 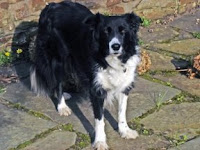 I read in the International Herald Tribune that big, black dogs are rarely adopted from animal shelters.
There is the story of Aaron Jones who experiences people crossing the street to avoid him when he walks Gozer, his Rottweiler-hound mix. Mothers scoop up their children and flee. A lost motorist rolls up the windows and drives off after spotting the dog. Women scream. "He's the nicest dog I know," said Jones, 33, of Oakland, California. "It's hard to understand all the fear."
According to animal shelter officials, big, black dogs like Gozer have more trouble finding a happy home than do other dogs. Some shelters even have coined a name for it: "Big black dog syndrome."
At the city animal shelter in Rogers, Arkansas, big, black dogs almost always make up the bulk of the animals put to sleep each month. Recently, 13 of the 14 dogs killed by the city were large and black, mostly Labs, shepherd mixes, pit bull mixes and Rottweillers.
It's not just that large dogs can be frightening. Animal shelters say black dogs of all sizes are difficult to photograph for online listings and are hard to spot against the shadows of their crates and cages in dimly lit kennels. Older black dogs with a little white in their muzzles can look elderly. Bigger breeds like German shepherds aren't as fashionable as small, cuddly lap dogs.
Then there's the reputation. The idea of a big, black dog unleashing destruction is a common theme in books, movies and folklore as diverse as "The Hound of the Baskervilles," the "Harry Potter" series and "The Omen."
Even the common sign "Beware of Dog" depicts a big, black dog, teeth bared and gums dripping and encourages the notion that these animals are menacing. The reports goes on to say that it's difficult to read a dark dog’s expressions. "There isn't a lot of contrast between black eyes and a black face, so people can't get a handle on how the dog is feeling," Nicosi, a NY behaviour specialist said.
Furthermore, it would seem people may subconsciously snub big black dogs because they aren't comfortable with what the pet may say about the owner.
One website devoted to increasing public awareness of the "big black dog phenomenon," offers some light hearted reasons to adopt a big, black dog. It argues that black doesn't clash with furniture or clothing, hides dirt well and is easy to “accessorize”.
However black dogs do appeal to those who want protection on walks late at night or to men who seek a canine boost of machismo, a spokesman for the Humane Society of New York.
It would also seem that there's a certain contingent of dog lovers on the east coast of the US who specifically seek out black dogs because of their connection to the trendy Black Dog bakery on Martha's Vineyard.
Well, how about that? What is the world coming to? I love my black dog. She clashes with the furniture. She dirties the house and the car. She is not a fashion accessory. She looks good on the web. I can read her expressions. I do not need her to protect me; in fact it’s the other way round. I do not care two hoots about her enhancing or not enhancing my image or about Martha’s Vineyard, for that matter.
Published by Eurodog on Tuesday, April 15, 2008 10 comments: 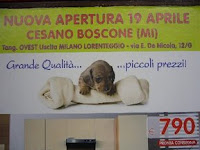 I have spent a few days in Italy. I was in Pavia, a university town some 30 kilometres south of Milan and here are some of my observations:
The women are straight out of Vogue. Immaculately dressed and groomed, made-up, styled hair, waggling their bottoms. And girls! Flats are out. Heels and high ones at that, are in. Even if they are unbelievably dangerous when walking on cobbled streets.
The men strut around in designer suits, with colourful silk ties and beautiful leather shoes. Nice haircuts. They look good, every single one of them, even the ticket collector on the train. They have a film star look about them.
The food is out of this world. No cooking cheats here…
The wine too. Even the slightly fizzy local Lombardia wine.
Now as for the dogs. I was really surprised to see the odd mix of dogs around. They were all small and non descript. Balls of fluff on 4 paws. The handsome men parading these lapdogs. I don’t get it.
Now in the two art museums I visited in Milan, I was surprised to see that in the biblical scenes depicted in these huge canvasses by Titian, Veronese, Raphaël, Flemish painters and others, there are always dogs somewhere to be found. Mostly in the foreground. Small dogs of the kind still fashionable today but also huge mastiffs which are rarer now. Possibly extinct. I must look into this.
Published by Eurodog on Thursday, April 10, 2008 9 comments: