How is this possible? 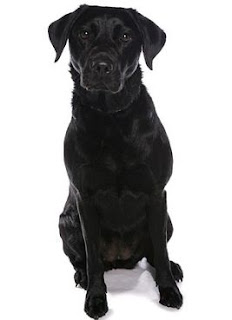 I read this tragic story in the papers.  How is this possible?  It is obviously a tragic accident but dog owners know about dogs in cars.  Every dog owner does.  This makes me so mad.  We have had the coldest winter in decades and the first rays of sun come out and this is what happens.  Just think everybody out there.  Just think!  Be mindful.
“A school's 'therapy' dog has died after being left in a hot car for six hours because of a 'staff mix-up'. Ruby,  the Labrador was used to help lower-ability pupils at in .
Owner Dave Carden, 53, a PE teacher, routinely took her in each day and left her in his car for another teacher to collect and take into class.
But on Tuesday - one of the hottest days of the year so far - she was not collected and remained in the car from 8am to 2.35pm.
Outside temperatures rose to the 20C mark and by the time Carden returned to his car, five year-old Ruby was dead.
He rushed her to the vets but there was nothing they could do to save her.”
RIP Ruby.
Published by Eurodog on Saturday, April 27, 2013 1 comment:

Email ThisBlogThis!Share to TwitterShare to FacebookShare to Pinterest
Libellés : In memoriam, irresponsible humans 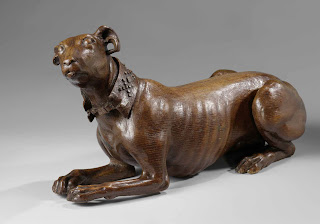 In view of the grand opening of the Rijksmuseum in Amsterdam this week after 10 years of renovation, I am copying a blog entry which I originally wrote in April 2009.


"Thanks to a donation from the Dutch lottery BankGiro Lottery, the Rijksmuseum in Amsterdam has acquired five sculptures, all of which make an exceptional contribution to the Rijksmuseum’s international collection of sculptures. From 21 April 2009, the sculptures can be admired in the Acquisitions Hall of the Rijksmuseum. The highlight of the exhibition is a lively sculpture of a Greyhound: the dog is looking up, alert, as though listening to his master. On his collar is the coat of arms of the Roose family from Antwerp, so it is likely the dog really existed. This exceptional animal ‘portrait’ was created by Artus Quellinus (1609-1668) from Antwerp. From 1648 onwards the sculptor spent considerable time in Amsterdam, where he was commissioned to design the sculptural decorations of the new Town Hall (today's Royal Palace on Dam Square). Many of the sculptures of the Town Hall decorations reveal the classicist influence that became increasingly popular in the mid-seventeenth century in the Northern Netherlands. Despite the numerous commissions that awaited him in the Netherlands, Quellinus decided to return to Antwerp in 1664 where he died four years later. "
Published by Eurodog on Saturday, April 20, 2013 No comments: 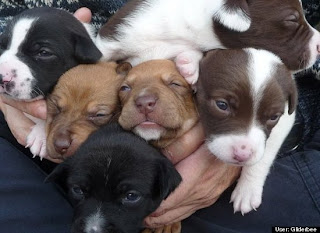 It’s National Puppy day in the today.  The day not only celebrates the magic of puppies, but more importantly, it's a day to help save orphaned puppies across the globe and educate the public about the horrors of puppy mills, as well as further the mission for a nation of puppy-free pet stores.

Puppy mills take advantage of naive consumers who are not aware of the treatment the fluffy pups in the window endure: "Puppy mills house dogs in shockingly poor conditions. After their fertility wanes, breeding animals are often killed, abandoned or sold cheaply to another mill to try and get "one more litter" out of the dog. The annual result of all this breeding is millions of puppies, many with serious behaviour and/or health problems."

Puppy mills aren't the only challenge facing dogs. An estimated 3-4 million dogs and cats are euthanized each year in the , due in part to owner abandonment and low adoption rates. 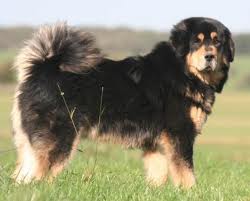 No, it's not Ozzy.  It's a Tibetan Mastiff.
﻿
The name Tibetan mastiff is a misnomer because technically it is not a true mastiff.  A better name for the dog would be Tibetan mountain dog or Himalayan mountain dog.  These dogs are seriously huge.  An average male weighs 80 kg.  They were and are still used to guard herds and flocks, tents, monasteries and palaces.  They are mostly tied up to guard houses.  It's Tibetan name means "dog which may be tied or door guard or home guard".
Published by Eurodog on Monday, April 08, 2013 1 comment: 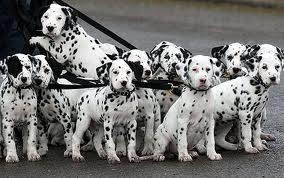 Did you know that Dalmatian puppies are born with plain white coats?  Their first spots usually appear within three weeks after birth.
Published by Eurodog on Saturday, April 06, 2013 3 comments: 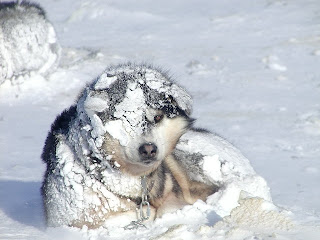 The practice of using dogs to pull sleds dates back to at least 2000 B.C. It originated in Siberia or , where many American Indian cultures used dogs to pull loads. In 1911, Norwegian explorer Roald Amundsen used sled dogs in a race to become the first person to reach the South Pole. He succeeded, while his competitor Robert Falcon Scott, instead used Siberian ponies because he lacked experience in handling dogs.  The poor ponies tragically perished.

One of the advantages of using sled dogs in polar regions is their uncomplicated food requirements. They can be fed seal meat; it is unnecessary to make elaborate arrangements for bringing along food for them. Amundsen went even further on his expedition to the South Pole. He shot the dogs he no longer required and fed them to his remaining sled dogs.

In the 20th century, more convenient technology such as the airplane and snowmobile replaced sled dogs as the preferred mode of transportation in the arctic and subarctic regions of . Today, mushing survives mostly in the form of the recreational sport of sled dog racing. Nonetheless, it remains an important cultural practice of the aboriginal people of , , and the state of .

Helmer Hanssen, who had been responsible for the welfare of the sled dogs in Amundsen’s South Pole team quoted:

"Dogs like that, which share man's hard times and strenuous work, cannot be looked upon merely as animals. They are supporters and friends. There is no such thing as making a pet out of a sledge dog; these animals are worth much more than that."
Published by Eurodog on Wednesday, April 03, 2013 4 comments: