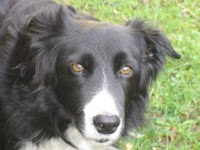 I shall be off line for about a week but I am leaving a picture of Belle to welcome you.
Published by Eurodog on Monday, March 31, 2008 7 comments: 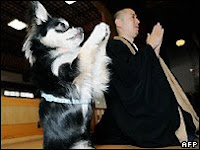 Attendance at a Buddhist temple in Japan has increased since the temple's pet has joined in the daily prayers.
Conan, a two-year-old Chihuahua, sits on his hind legs and joins in daily prayers by raising his paws and putting them together at the tip of his nose.
"He may be showing his thanks for treats and walks," says a priest at Jigenin temple on Okinawa island, Japan.
Priest Joei Yoshikuni would like Conan to meditate, but "it's not like we can make him cross his legs", he says.
"Basically, I am just trying to get him to sit still while I meditate," he told Associated Press news agency.
Mr Yoshikuni said it only took Conan a few days to imitate the motions of praying.
"I think he saw me doing it all the time and got the idea to do it too," he said.
Published by Eurodog on Monday, March 24, 2008 10 comments:

From the Puppy Purse home page: “As seen on Good Morning America. Take your best friend wherever you go in open-air comfort and pampered elegance with the Original PuppyPurse Carrier System. This versatile puppy purse pet carrier is lightweight, adjustable, and supportive, minimizing the stresses on your body while maximizing your ability to interact with your dog or cat. You can wear it like a shoulder bag or fanny pack, carry it like a purse, or use the straps as a leash. Available in a variety of sizes, styles, and colors. Pet fashion accessories also available, including designer sterling silver, swarovski crystal, glass, and turquoise jewelry charms crafted exclusively for PuppyPurse to be worn on your handbag, purse, key rings, and cell phones.”
Of course, Paris Hilton has one.
Unfortunately, there is no store in Brussels so sadly poor old Belle will have to venture out without one.
I shall not say more about it but suggest you have a look at the Puppy Purse website. It is well worth a visit: http://www.puppypurse.com/index.html
Have we gone completely bonkers?
Published by Eurodog on Wednesday, March 19, 2008 7 comments: 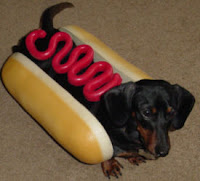 The term "hot dog" was coined in 1902 during a Giants baseball game at the New York Polo grounds. On a cold April day, concessionaire Harry Mozley Stevens from Ohio was losing money trying to sell ice cream and ice-cold sodas. He sent his salesmen out to buy up all the wiener/frankfurter sausages they could find, and an equal number of rolls. In less than an hour, his vendors were hawking these sausages in a bun from portable hot water tanks while yelling, "They're red hot! Get your dachshund sausages while they're red hot!" They called them dachshund sausages because they felt the wiener/frankfurter sausage looked like a dachshund. It is said that the famous cartoonist T A Dorgan (Tad) recorded these odd new things in a cartoon in the New York Journal, drawing them as dachshunds in buns, and called them hot dogs because he couldn’t spell frankfurter. Unfortunately for Stevens, at first, many people believed that the hot dog really contained dog meat. Eventually people realized otherwise, and the hot dog became one of the most popular foods in the United States.
Published by Eurodog on Saturday, March 15, 2008 7 comments: 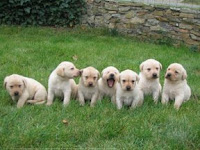 Vet Dr Frank Miller used to have a column in the San Francisco Chronicle in the 1970's. His book Wonderful World of Dogs is a compilation of the letters he received and his answers to them. I was leafing through and came across this one:
"Dear Dr.Miller,
I've got a big problem. My wife loves our dogs, any one of them and we have a few, more than she does me. What can I do?"
Reply from Dr.Miller:
"Sorry, but you will have to turn elsewhere for advice. I'm only qualified to help dogs, and obviously they do not need my help."
Published by Eurodog on Tuesday, March 11, 2008 7 comments:

No, it is not Belle. It's Betsy.
This morning the March issue of the National Geographic came through the letter box. The caption for the leading article is:
"Minds of their own. Animals are smarter than you think." Betsy like Belle has meaningful eyes. The opening words on the article on her are:"How much thought goes on behind those eyes?"
The answer is: "A lot, in this case." The article goes on to say:"Six-year-old Betsy can put names to objects faster than a great ape and her vocabulary is at 340 words and counting. Her smarts showed up early: at ten weeks she would sit on command and was soon picking up on names of items and rushing to retrieve them (ball, rope, paper, box, keys and dozens more). She now knows at least 15 people by name and in photographic tests she is proved skilled at linking photographs with the objects they represent. Her owners say they are learning her language and Betsy is learning theirs".
Belle is equally clever. She has a wide vocabulary as well and has the added asset of being bi-lingual. She understands English and French equally well. I think that's pretty smart too.
Published by Eurodog on Thursday, March 06, 2008 12 comments:

Misha Defonseca, who wrote "Misha: A Memoire of the Holocaust Years," admitted through her lawyer that her story was fabricated. Published in 1997 by Jane Daniel, the book told the tale of a little Belgian Jewish girl who trekked across Europe on foot during World War II, searching for her deported parents and eluding capture by hiding with packs of friendly wolves. It turns out the author made the story up.
European readers ate up the story. The book has been translated into 18 languages and is the basis for a new French movie, "Survivre avec les Loups" but some had doubts. Belgian surgeon Serge Aroles, author of a book about the history of wolf-children narratives, said he read the French edition and right away thought it was a fake. He knew the roundup of Belgian Jews had happened in 1942, not 1941. Other details about times and places were wrong. And the wolf part, he thought, was laughable.
The Holocaust scholars are outraged, as much at the publiher as at Defonseca. "What happened to the Jews was the worst atrocity in history, and people who exploit it for profit, by posing as Jews or lying about being part of the experience, insult those who went through it," said Langer. "It's as bad as saying the Holocaust never happened."
In a statement issued by her Belgian lawyer, Misha Defonseca, confessed that she is not Jewish and that she spent the war safely in Brussels.
In her statement, Defonseca said: "Yes, my name is Monique De Wael, but I have wanted to forget it since I was 4 years old. My parents were arrested and I was taken in by my grandfather, Ernest De Wael, and my uncle, Maurice De Wael. I was called 'daughter of a traitor' because my father was suspected of having spoken under torture in the prison of Saint-Gilles. Ever since I can remember, I felt Jewish. . . . There are times when I find it difficult to differentiate between reality and my inner world. The story in the book is mine. It is not the actual reality - it was my reality, my way of surviving. At first, I did not want to publish it, but then I was convinced by Jane Daniel. I ask forgiveness from all those who feel betrayed."
« Je me suis raconté une vie, une autre vie. Je demande pardon »
A spokeswoman for Vera Belmont, the French director of "Survivre avec les Loups," said: "Vera is not making any comment. Her movie is a fiction from the book. No matter if it's true or not - she believes it is, anyway - she just thinks it's a beautiful story."
The publisher Jane Daniel met Defonseca in the mid-1990s, heard her story, and suggested that she write a book. In 2001, a US court jury issued a $7.5 million breach-of-contract judgment against Jane Daniel after Defonseca and Lee, her co-author, alleged that she had failed to publicise the book as promised and had hidden profits. The judge in the case tripled the damages to $22.5 million, and an appeals court upheld the verdict in 2005.
http://eurodogtraining.blogspot.com/2008/01/horrors-of-war.html
Published by Eurodog on Monday, March 03, 2008 5 comments: