Dick Twinney is renowned for his detailed, lifelike paintings faithfully depicting wildlife and countryside scenes.
His packed studio is a room in his home in St Columb Major, North Cornwall, where hundreds of wildlife books cram the shelves and where his paintings are on display.The magnificent scenery and the rich and varied wildlife of the South West provide a constant source of inspiration and never ending material for his highly detailed artwork.
A real countryman, Dick always spends several hours each day in the 'field' walking with the family dogs (all rescue dogs ) over the moors, along the coast or in the local woods, observing wildlife in it's natural habitat, constantly on the look-out for that 'special' chance encounter that can be recreated onto canvas.
Meet Honey from Burlorne Tregoose Farm near Wadebridge in Cornwall.
Published by Eurodog on Saturday, May 31, 2008 10 comments:

Avant-garde writer and culture impresario Gertrude Stein was a solid, heavy presence, monolithic, unladylike. She liked to gossip and a good laugh. She boxed with welterweights for exercise. Alice B. Toklas was a chain smoker with a slight moustache, given to exotic dress, gypsy earrings and manicured nails. They became inseparable after they met in Paris in 1907. Alice cooked, typed manuscripts, fended off the unwanted, did promotions and chatted up the wives and significant others of famous men, including F. Scott Fitzgerald, T.S. Eliot, Guillaume Apollinaire, Jean Cocteau, Pablo Picasso and Ernest Hemingway who found her "frightening". On a lecture tour of American universities in the 1930s, Stein would begin her obscure lectures with the following words: “I am I because my little dog knows me but perhaps he does not and if he did I would not be. ” She insisted, there are two selves: an external "I," whom a pet may recognize as its master and an interior "I" that exists independent of observation. She would conclude that "I am I because my little dog knows me but that does not prove anything about you it only proves something about the dog". Say what?
Published by Eurodog on Tuesday, May 27, 2008 7 comments:

Cai Guo-Qiang’s Head On ( click on picture to enlarge ) is an arc of 99 lifelike and life-size replicas of wolves that appear to be barrelling in a continuous stream towards a glass wall which they career into head on. I saw a picture of this work of art in The New Yorker and my attention was drawn to it because I thought they looked like dogs.
The wolves were produced in Quanzhou, China. The commissioned local workshop in Cai’s hometown specialises in manufacturing remarkable, life-size replicas of animals based on clay models and drawings. The realistic and lifelike 99 wolves that grew out of these models and drawings possess no literal remnants of wolves: they are fabricated from painted sheepskins and stuffed with hay and metal wires, with plastic lending contour to their faces and marbles for eyes.
Cai Guo-Qiang was born in 1957 in the city of Quanzhou in Fujian Province, China, and is considered today to be one of the most important contemporary international artists.
Cai is due for plenty of attention in the coming months, as he is in charge of the visual and special effects for the opening and closing ceremonies at the Beijing Olympics.
Peter Schjeldahl of The New Yorker says of Cai who is known as an installation and pyrotechnic artist that : “A whiff of eccentric passion complicates the character of his art, which is strenuously theatrical and weirdly political (with ambiguous stands on Mao Zedong and terrorism), calculated in content (East-West tropes are a specialty), and ad hoc in form.”
Well, yes. Of course.
Would anybody like to fly over to New York with me? The Guggenheim is open late on Fridays.
Published by Eurodog on Friday, May 23, 2008 7 comments:

"The worst is still to come" 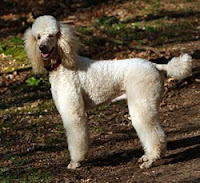 The title is a quote from Schopenhauer, one of the world’s greatest pessimists, who wrote among other things about the goodness of dogs. Depressed and prey to phobias, he alternated portraits of dogs with portraits of great philosophers on the wall of his apartment in Frankfurt which he shared with his poodle called Atma. He even went so far as to protest against the use of the pronoun "it" in reference to animals because he felt, it led to the treatment of them as though they were inanimate things.
Published by Eurodog on Tuesday, May 20, 2008 3 comments:

30 seconds in the life of Eurodog 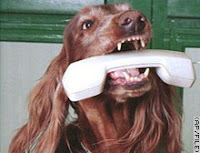 I answered the phone this morning and this is how the conversation went : « Please you’ve got to help me with my Labrador. She’s getting out of hand. She is 10 months old and I got her from a very good breeder. She has a pedigree, you know. She has a tattoo and a microchip. My son whose good-for-nothing wife left him cannot come to the dog club with the dog because he has epilepsy and is prone to fits. He is such a good lad; I don’t know why she was so horrible to him. He has found himself a new girlfriend and I think she is a decent girl. Not pretty but that doesn’t matter does it? I can’t come either because I am 77 but that’s not the problem. See, I have just been diagnosed as having Meuniere disease and have dizzy spells. I have heart problems too something to do with the valves and the aorta. I have acute asthma and when it is this hot I can’t breathe properly so I can’t leave my house. I can’t use public transport because I might faint and my husband, ex-husband actually, still lives with me but he is an alcoholic. He is willing to drive me to your club but he’s always drunk and a real liability on the road. My son still lives with me. Just as well with his epilepsy. He has no car anymore because is good-for-nothing wife went off with it. You have to help me”
The whole conversation took 28 seconds so you can imagine how fast all this information was transmitted. My concern was the dog but I was unable to make myself understood.
Who gave this lady my name?
Published by Eurodog on Thursday, May 15, 2008 10 comments:

Today at the dog club, we invited young children between 5 and 10 to a class about dogs.
We asked them to talk about their dog. Where does it sleep? How often does it eat? Does it sleep on your bed? What breed is it? Who walks it? Does it bite? And so on… They got terribly excited and all started to talk together. We caught their attention again by explaining some basic do and don’ts ( more about that some other time. Watch this space!) They were in awe when we told them dogs are not allowed chocolates. Not even at Christmas. To keep them focused we asked them if they had any questions and a little girl put her finger up and asked if dogs went to heaven after they died. Without humming and arring we replied: “Of course they do.”
“If we have souls, then dogs have souls, and if we go to heaven, so do they…because if dogs are not there...it is not heaven.” says Elizabeth Marshall Thomas, an American anthropologist.
Published by Eurodog on Saturday, May 10, 2008 7 comments:

A Dutch couple were arrested the other day for violently killing their dog. The poor unsuspecting animal followed its owners into the park for its daily walk and never returned. Passers-by found the dog’s bloody body in a rubbish bin. Police were called and the vet who carried out the autopsy declared the dog’s head had been repeatedly hit with a hammer. The couple were called in for questioning by the police and admitted to the crime. When asked why they did this, they replied the dog shed too much fur. The dog was a Beagle. The couple were not prosecuted.
Published by Eurodog on Friday, May 02, 2008 9 comments: