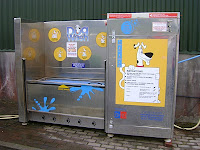 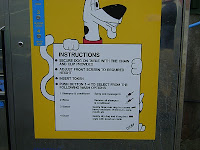 We visited a huge and well stocked garden centre and we came across this dog wash machine.

Here are the instructions.
Click on picture to enlarge.


I cannot image putting Belle in one of those.  She would hate it!
Published by Eurodog on Thursday, August 26, 2010 9 comments:

Email ThisBlogThis!Share to TwitterShare to FacebookShare to Pinterest
Libellés : pet products, what next? 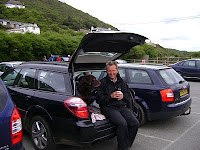 The other day we had tea in our favourite beach café run by a New Zealand lady on one of the most spectacular beaches of North Cornwall.  Best saffran cake in the world, incidentally!
RW decided to have tea with his 5 year old Labrador, Murphy.
We chatted about this and that.
Published by Eurodog on Monday, August 23, 2010 2 comments: We saw these people running around on a secluded beach in North Cornwall and witnessed their collie rounding them up until they eventually were together in a group. It turns out they were scattering their granny’s ashes!
Click on picture to enlarge.
Published by Eurodog on Wednesday, August 18, 2010 1 comment:

A perky black Labrador whose bomb-sniffing exploits helped save lives in Afghanistan was decorated for canine courage in a ceremony at the Imperial War Museum a few months ago.
Eight-year-old Treo joins a menagerie of heroic animals honoured over the years with a special award known as the Dickin medal, including 32 pigeons, three horses and a cat.
Sgt. Dave Heyhoe, the black Lab's handler, said he was "very proud indeed," adding the award was not just for him and his dog but "for every dog and handler working out in Afghanistan or Iraq."
Published by Eurodog on Tuesday, August 10, 2010 5 comments:

Email ThisBlogThis!Share to TwitterShare to FacebookShare to Pinterest
Libellés : memorials 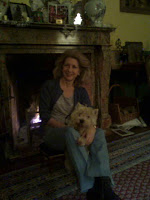 Email ThisBlogThis!Share to TwitterShare to FacebookShare to Pinterest
Libellés : In memoriam

More than 60 dogs showed up for the 5th annual Loews Coronado Bay Resort Surf Dog competition in Imperial Beach, California this week to compete for an adorable, if odd, honour. In 10 minutes the dogs had to prove their physical prowess to the judges who were looking for confidence and length of ride.
A dog owner spoke to a journalist about his pup Buddy saying: "He's really passionate about it. He sees this as a game and he wants to play. I'm sure he's ridden more waves than any other dog. My job is to get him into the critical part of the wave."
This year's contest raised money for the San Diego Police Department's canine unit.

These dogs do not look happy to me.  I do not agree with Buddy's owner.
Published by Eurodog on Sunday, August 01, 2010 4 comments: