The department of Veterinary Clinical Studies from the University of Edinburgh published a series of papers a few years ago and in one of them it describes a study of veterinarians’ experiences of encountering non-accidental injury in dogs and cats. Sexual abuse is reported but also cases of suspected Munchausen syndrome by proxy (MSBP), involving pets as proxies, were identified among 448 cases of non-accidental injury to small animals. These cases, recorded by a random sample of small animal practitioners in the UK, demonstrated several combinations of features, including attention-seeking behaviour by the owner, real and apparently factitious clinical signs, deliberate injury, markedly abnormal biochemical profiles, serial incidents, interference with surgical sites, recovery after separation from the owner, and 'veterinarian-shopping' by the owner. All of these features are consistent with those identified in the well documented MSBP in which children are the victims. One of the cases involved serial attempts at poisoning other animals and a child. Sudden death and unusual illnesses in pets are recorded in this study.
In Munchausen syndrome, a child is the usual proxy characterised by falsification of illness usually, but not invariably, by the mother in order to mislead the physician into believing that the child is ill. The usual motive is to gain sympathy and attention.
The syndrome was named after the 18th century mercenary, Baron von Munchhausen, who was compelled to tell the most incredible lies about his adventures, and who became increasingly addicted to the attention and adulation he received.
Disturbing.
Published by Eurodog on Sunday, May 31, 2009 4 comments:

Have a look at this amazing video.
A word of caution. Dogs like very young children drown in swimming pools. And it doesn't just happen to singers or rock stars in their villas in California. Some breeds like retrievers will even jump into the most shallow pools just because their instinct gets the better of common sense. Dogs can fall into pools by accident but more often than not they jump into a pool to catch a ball and then find they cannot get out. Not all pools have shallow ends and dogs are not good at climbing ladders! So keep an eye on your dog if you have a pool or erect a fence around the pool or cover it with a properly fitting cover. And don't say to yourself as many people do: "He/she has to learn." Accidents do happen. Believe me.
Published by Eurodog on Tuesday, May 26, 2009 3 comments:

Do you think I am dumb or something? 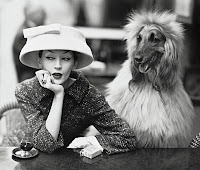 Though best known to the public for his series of best-selling books on dogs, Stanley Coren is also a well respected scientist and Professor of Psychology at the University of British Columbia.
With the help of over 200 professional dog obedience judges, he ranked 110 dog breeds on the basis of their intelligence. According to them, the most intelligent dog is the Border Collie and the dummest the Afghan Hound.
This picture was taking by Richard Avedon in 1955 at the Café des Deux Magots in Paris.
Published by Eurodog on Thursday, May 21, 2009 6 comments: 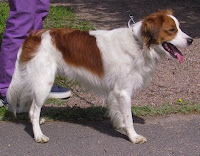 I was in Holland yesterday and came across a dogbreed I did not know. I asked the dog's owner what breed it was and she told me it was a typical Dutch farmdog, a Kooikerhondje or Kooiker Hound. It is a small spaniel-type breed of dog of Dutch ancestry that was originally used as a working dog, particularly in duck hunting. Kooikers were popular in the 17th and 18th century and appeared in paintings by Rembrandt and Jan Steen. Kooikers were bred as duck decoys, used for trapping live waterfowl by attracting them with their bushy tails, leading them along the banks of a canal, and finally drawing them into a catching pen. Unfortunately, the Kooiker became much less useful as duck decoys and became unpopular and by the end of WW II the breed became nearly extinct with only about twenty-five Kooikers left. Due to the efforts of eccentric dog breeder Baroness van Hardenbroek van Ammerstol, the Kooiker made a spectacular reappearance. It received its final recognition from the Dutch Kennel Club in 1971, when it was decided a sufficient gene pool had been established. They are also useful farmdogs, destroying rats and feasels and other vermin which destroy crops and property. A Kooikerhondje was Prince William of Orange's dog and faithful companion who saved him from an assassination attempt whilst he was asleep by barking furiously.
Published by Eurodog on Thursday, May 14, 2009 3 comments:

The organist of Hereford Cathedral, who was a friend of Elgar, had a Bulldog named Dan. The dog attended chorus rehearsals in the cathedral and growled when people sang out of tune. Elgar was particularly fond of Dan and in a note on No XI of the Enigma Variations, he explained that the first few bars were suggested by the dog. Bar one of the music represented Dan falling down a bank of the River Wye, while bars two and three had him paddling upstream to find a landing place and the second half of bar five was his happy bark upon landing.
Any comments, Mr Eurodog?
Published by Eurodog on Monday, May 11, 2009 2 comments:

In Brussels, this ad can be seen on the back of every bus, at every bus stop, in every metro station, in every magazine or newspaper. It's everywhere. Now unless you are into vacuum cleaners, this ad would go unnoticed, I am sure. It caught my eye and the only reason is the picture of the dogs. The big hairy one is a Briard like Rokedi who belongs to my 89 year old friend.

NB: I do speak Dutch but this is double Dutch to me. 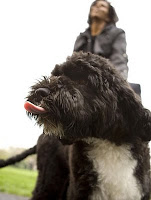 As you all know by now, the Obamas have acquired a puppy. It is a Portuguese water dog and they have named it Bo.
Moira McLaughlin, whom I met on the blogger circuit, is an artist from LA and founder of Dog Art Today, a blog that features daily dog art from around the world. With the election of Barack Obama and the "Puppy Speech," she came across hundreds of Obama dog stories which she felt needed a home. So, she started The Obama Dog Blog, which she envisions as a virtual scrapbook for the First Puppy.
Have a look: http://dreamdogsart.typepad.com/the_obamas_dog/
Published by Eurodog on Saturday, May 02, 2009 4 comments: