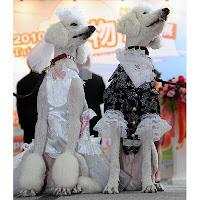 Just 10 years ago, dogs were still eaten in public restaurants and raised on farms for that purpose in Taiwan. Traditional Chinese medicine held that so-called "fragrant meat" from dogs could fortify one's health.
Now, selling dog meat is illegal, and violators can be slapped with a nearly $8,000 fine, according to Huang Ching-Jung, secretary-general of Taiwan's Animal Protection Association. Eating dog is viewed by many Taiwanese as an embarrassing reminder of a poorer time.
Instead, Taiwanese have embraced dog-owning culture with a vengeance. Dogs are brought into restaurants, fussed over in public, dressed up in ridiculous outfits and wheeled to the park in frilly custom-made buggies.
Huang chalks up the rapid change in attitude to several factors. Taiwan's education level has risen rapidly, and animal welfare groups like his have successfully campaigned for better treatment of animals, with the media's help. The island has grown richer, meaning Taiwanese can now afford many types of meat, and can buy other medicines.
"You don't need dog meat to make you healthier, and we don't need dogs as a source of meat," said Huang. "So dogs have become our friends and companions."
Also, Taiwanese are increasingly shunning marriage and deciding not to have children (the island has one of Asia's lowest birth rates). Raising a dog has become a substitute. "It's like having a child — it becomes family," said Huang.
Finally, there's one all-important factor: "Dogs are very cute animals," Huang said.
The picture was taken at this year's Pets Show Tapei which took place earlier this month.
Published by Eurodog on Sunday, July 25, 2010 3 comments:

Email ThisBlogThis!Share to TwitterShare to FacebookShare to Pinterest
Libellés : events, odd couples, what next? 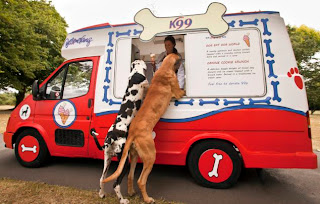 A new ice cream van with tasty treats specifically for canines will have man's best friend howling with delight. Instead of offering the traditional vanilla whip cones topped with a flake, these frozen feasts contain gammon and chicken ice cream - complete with a crunchy canine biscuit bone. A team of scientists investigated the perfect combination of temperature, texture and taste, ensuring the treats would be delicious to dogs and completely safe.
They came up with two flavours - 'dog eat hog world' - a gammon and chicken sorbet topped with a biscuit and served in a cone - and 'canine cookie crunch' - a combination of mixed dog biscuits and ice cream.
The K99 van can be found in British parks this summer and, rather than the traditional chimes, the van will be playing the theme tune to Scooby Doo.
Published by Eurodog on Tuesday, July 20, 2010 5 comments:

Did you see this chap cycling up the Mont Ventoux in the Tour de France?
Published by Eurodog on Monday, July 19, 2010 3 comments:

The African wild dog, also called Cape hunting dog or painted dog, typically roams the open plains and sparse woodlands of sub-Saharan Africa.
These long-legged canines have only four toes per foot, unlike other dogs, which have five toes on their forefeet. The dog's Latin name means "painted wolf," referring to the animal's irregular, mottled coat, which features patches of red, black, brown, white, and yellow fur. Each animal has its own unique coat pattern, and all have big, rounded ears. 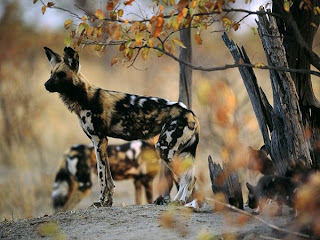 African wild dogs live in packs that are usually dominated by a monogamous breeding pair. The female has a litter of 2 to 20 pups, which are cared for by the entire pack. These dogs are very social, and packs have been known to share food and to assist weak or ill members. Social interactions are common, and the dogs communicate by touch, actions, and vocalizations.
African wild dogs hunt in formidable, cooperative packs of 6 to 20 (or more) animals. Larger packs were more common before the dogs became endangered. Packs hunt antelopes and will also tackle much larger prey, such as wildebeests, particularly if their quarry is ill or injured. The dogs supplement their diet with rodents and birds. As human settlements expand, the dogs have sometimes developed a taste for livestock, though significant damage is rare. Unfortunately, they are often hunted and killed by farmers who fear for their domestic animals.
African hunting dogs are endangered. They are faced with shrinking room to roam in their African home. They are also quite susceptible to diseases spread by domestic animals.
Published by Eurodog on Wednesday, July 14, 2010 2 comments:

A fun day out! 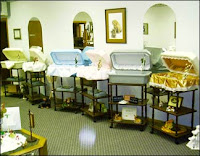 Of all the wonderfully weird roadside attractions in Michigan, this one stands out as one of the most bizarre. The Hoegh Pet Cemetery in Gladstone, Mich., offers factory tours where visitors can learn the history of pet burial and see all the steps required for making a pet casket. You can also take a tour of the pet cemetery and attend a mock pet funeral, complete with eulogy, floral arrangements and images of teary-eyed loved ones. The blurb says: "It's fun for the whole family!"
Published by Eurodog on Friday, July 09, 2010 5 comments: 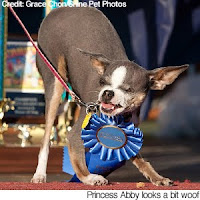 Princess Abby, a grey, brown and black Chihuahua with a curved back and legs and a scrunched-up left eye, was named 2010 World's Ugliest Dog before a packed crowd at the Sonoma-Marin Fair in Petaluma, California. Entrants came from across the US including Arizona, Florida and New Jersey. Princess Abby's owner, Kathleen Francis, won first prize of $1,000, but will have many new opportunities for fame as she and Princess Abby will be guests on television shows throughout the U.S. and abroad.
Princess Abby was picked up five months ago on the streets as a malnourished, flea infested stray. Francis adopted the dog from her vet. Other entrants in the contest have similar hard luck stories and stand out as strong survivors of abandonment and neglect. Their owners and the contest help to carry the event’s organisers’ message: ”Princess Abby is the poster child for spaying and neutering your animals. Her looks probably stem from being inbred."
Published by Eurodog on Sunday, July 04, 2010 2 comments: 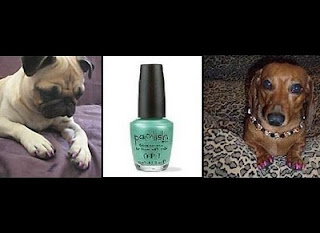 There is something seriously wrong with people who would consider buying nail varnish for their dog.  What is wrong with our society?
Published by Eurodog on Friday, July 02, 2010 1 comment: