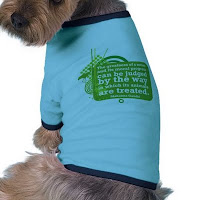 I shall give some thought to Gandhi's quote: "The greatness of a nation and its moral progress can be judged by the way its animals are treated."
Published by Eurodog on Wednesday, October 28, 2009 1 comment: 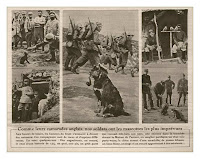 The Royal Museum of the Armed Forces and of Military History here in Brussels is showing an exhibition on animals in WWI and particularly on their work in the trenches and on the battlefields. Dogs of course played a vital role and many exhibits through magazine and newspaper cuttings, propaganda posters, photographs, stuffed animals, writings and commemorative medals, films, endless stories and diaries, sound effects, … show their involvement. The exhibition is well worth a visit. The Museum is grandiose and I must spend some more time there. ( It’s free!! ).
I particularly liked the story of Bella and Bertha, two cows which had been abandoned on a Flemish battlefield. They became the 2nd Battalion Scots Guards mascot and marched with the regiment in the 1919 London Victory Parade.
Published by Eurodog on Monday, October 26, 2009 1 comment:

And so to bed 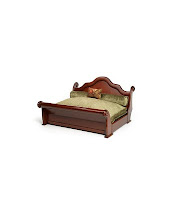 This Mahogany sleigh bed is for sale from Harrods on-line for a mere 399 pounds sterling. It is designed with curved sweeping arms, has a rich mahogany stain and a royal green pillow with hidden zip and a machine washable cover ( thank goodness for that! ). It looks like a miniature bed but it measures 70 cm x 75 cm ( yes, big! ).
The blurb goes on to say: “Exuding elegance, this mahogany sleigh bed lets your pet relax in complete comfort and style. Using the finest chenille fabrics and distinctive designs, the exquisite range from Beds for Dogs & Cats by Barba promises to complement your home décor”.
My first reaction on reading about this?
- what? 440€ to complement my home décor?
- what else does Barba design?
- would you add this to your shopping basket? If yes, would you click one or two or more in the quantity box?
- why does a Chihuahua need such a big bed?
Belle would not be seen dead in one of those. What about Will Smith’s dogs?
Published by Eurodog on Friday, October 23, 2009 1 comment: 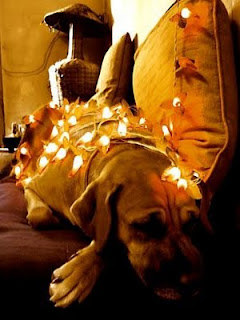 Today India and Nepal celebrate Diwali or “festival of lights”. It is particularly sacred to Hindus, but followers of other Indian religions also celebrate Diwali. Jainist, Hindu, and Sikh communities all over the world commemorate Diwali with smaller festivals of their own. The timing of this holiday varies, since it is based on the Hindu lunar calendar, but it is generally celebrated in the autumn. Diwali festivities in India involve everyone, not just the religious faithful, and the holiday is a major event in the Indian year.
The festival celebrates the triumph of good over evil; in Hindi, Diwali means “festival of lights,” and people light rows of lights to commemorate heroic figures in Indian mythology who triumphed over the forces of evil. Diwali is also a time for new endeavours, and many people clean their houses and open all their windows and doors to welcome luck and good fortune. The exchange of gifts is also traditional during this holiday, and many people host dinners and Diwali parties.
Published by Eurodog on Saturday, October 17, 2009 1 comment:

My American friend, JVS, sent me this joke.
"A guy is driving around the back woods of Montana and he sees a sign in front of a broken down shanty-style house: 'Talking Dog For Sale '. He rings the bell and the owner appears and tells him the dog is in the backyard.
The guy goes into the backyard and sees a nice looking Labrador Retriever sitting there.
'You talk?' he asks.
'Yep,' the Lab replies.
After the guy recovers from the shock of hearing a dog talk, he says: 'So, what's your story?' The Lab looks up and says,: 'Well, I discovered that I could talk when I was pretty young. I wanted to help the government, so I told the CIA. In no time at all they had me jetting from country to country, sitting in rooms with spies and world leaders, because no one figured a dog would be eavesdropping. I was one of their most valuable spies for eight years running. But the jetting around really tired me out, and I knew I wasn't getting any younger so I decided to settle down. I signed up for a job at the airport to do some undercover security, wandering near suspicious characters and listening in. I uncovered some incredible dealings and was awarded a batch of medals. I got married, had a mess of puppies, and now I'm just retired.'
The guy is amazed. He goes back in and asks the owner how much he wants for the dog.
'Ten dollars,': the guy says.
'Ten dollars? But this dog is amazing! Why on earth are you selling him so cheap?'
'Because he's a liar. He never did any of that shit.'"
Published by Eurodog on Wednesday, October 14, 2009 1 comment:

Published by Eurodog on Monday, October 12, 2009 No comments: 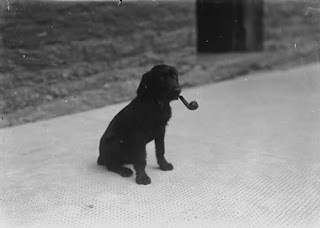 My friend, FRM, is an art historian. I attended a lecture she gave on Magritte followed by a guided tour in the newly opened Magritte museum on the Place Royale here in Brussels. Magritte, it would appear, was not interested in art for the sake of it and was quite happy to see reproductions of paintings in books or magazines or newspapers or postcards and was not eager to travel the world over to see the originals. His wife, Georgette, dragged him to the Uffizi in Florence and Magritte after seeing one Botticelli after another, stormed out of the gallery saying: “J’en ai marre des Botticelli.” ( "I have had enough of Botticellis"). And went off to walk his dog.
Published by Eurodog on Thursday, October 08, 2009 3 comments: 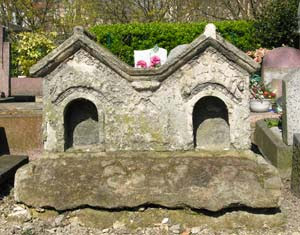 The Cimetière des Chiens is believed to be the first zoological necropolis and the world’s oldest public pet cemetery. It opened in 1899 in Asnières-sur-Seine, a suburb of Paris. It owes its beginnings to a law passed in 1898, when the Paris city authorities declared that dead pets couldn't just be tossed out with the household rubbish or dumped in the Seine, but had to be buried in hygienic graves at least 100 meters from the nearest dwelling.
This elaborate pet cemetery is the burial site for many dogs but also for a wide variety of pets ranging from horses to monkeys to lions and even fish. Over the years 40 000 animals have been buried there.
The cemetery caters to a very elite clientele. Filled with grand and ornate sculptures, at the entry is the monument to Barry, a Saint Bernard mountain rescue dog who died in 1814. The plaque says that during his lifetime, "Barry" was responsible for saving the lives of 40 people lost or trapped in the mountain snow.
Some of the cemetery's residents are famous in their own right such as Rin Tin Tin, the star of a number of Hollywood films, while others are the beloved pets of the wealthy who could afford this elaborate burial place such as film director Sacha Guitry. Buried here too, is the pet lion of stage actress, feminist, and co-founder of the cemetery, Marguerite Durand and the pet of Camille Saint-Saëns, composer of Carnival of the Animals.
The cemetery today is operated by the city of Asnières and in 1987, the government of France classified the cemetery as a historical monument. However, the cemetery has fallen on hard times and no longer draws very many tourists. Its owners have stated that they may have to close it.
One of the Paris tourist guides I browsed through, advises visitors on the opening times in summer and in winter, on the entrance fee of 3€ for adults and 1€ for children over 6. It goes on to say that : “Unless they're dead and buried, dogs must be kept on a short leash.”
Published by Eurodog on Monday, October 05, 2009 1 comment: