Ozzy with his girlfriends 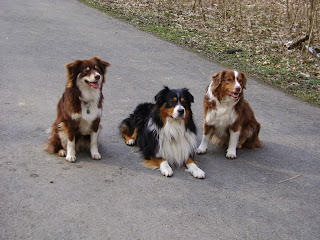 Koko is on the left, Vichy on the right.  The command was "sit" but Ozzy does not care too much about things like that.
Published by Eurodog on Wednesday, November 27, 2013 1 comment: 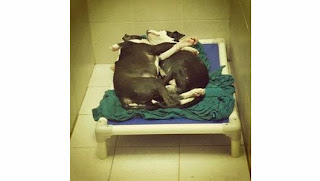 When Philadelphia-based animal rescue Operation Ava took in a pair of 8-month-old pit bull mixes, shelter workers noticed something strange about the dogs.


When they walked, the dog they’d named Jeffrey always followed behind his brother, Jermaine, with his head resting on Jermaine’s back. That’s when they realized that Jeffrey was blind and his brother had stepped in to be his seeing-eye dog.


The dogs were inseparable and even cuddled together at night.


Veterinarians think Jeffrey was born blind in one eye, but may be able to see shadows with his other eye. He’s only comfortable walking when he has Jermaine to guide him.


Workers decided that the dogs should be kept together, but they hadn’t received any adoption applications for the pair until a photo of the cuddling pair was posted on the Chester County SPCA Facebook page.


The photo went viral and soon applications were pouring in from across the , as well as from , and .


Workers are now trying to choose the best placement for the dogs.
Published by Eurodog on Saturday, November 23, 2013 3 comments:

Ozzy off to the forest. 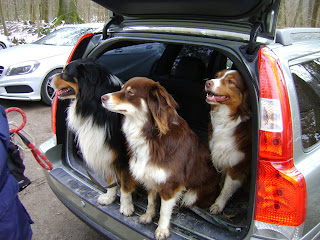 Ozzy is off to the forest with his girlfriends Vichy and Koko, two brown Australian Shepherds.  They are all good friends. 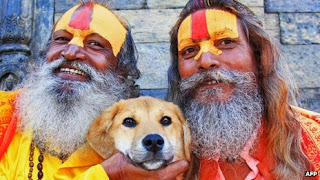 An abandoned puppy rescued from a rubbish dump in India has trekked to Everest Base Camp, a height of 17,598ft (5,364m) above sea level.
Its owner told the AFP news agency that they believed that it was the first dog to climb so high on the mountain.
Former professional golfer Joanne Lefson adopted the 11-month-old dog, called Rupee, in the Himalayan Indian town of Leh last September.
The pair began "Expedition Mutt Everest 2013" on 14 October.
The aim was to raise awareness about the plight of homeless dogs and encourage adoption.
The pair traversed wobbly bridges, scaled treacherous mountain paths and narrowly escaped landslides for 13 days.
The dog quickly adjusted to high altitudes and loved the snow. In the course of his travels he was cuddled by Himalayan monks and petted by innumerable children.
"I am so proud of Rupee," Ms Lefson told AFP. "I thought I might have to carry him on some days, but instead, he took the lead and pulled me along."
When she first came across the puppy he was dehydrated and close to death, she said.